Prachi tries to kill herself after getting suspended from college, Pragya sees this and tries to stop her. 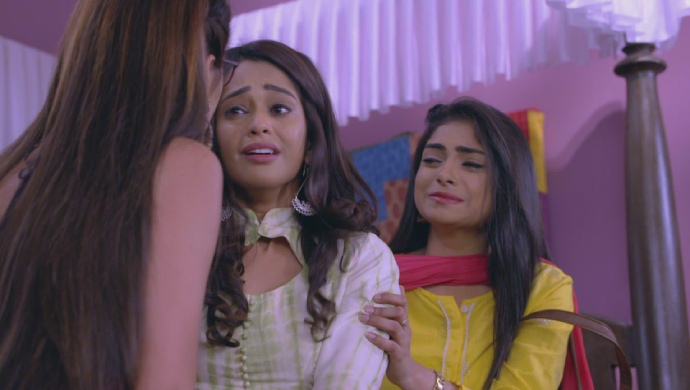 In the previous episode of Kumkum Bhagya, Prachi is afraid to go to college but Pragya convinces her to face her fears. She gets teased in school for messing up the food at Abhi’s party. Ranbir supports Prachi and consoles. her. Rhea sees this and gets jealous. She plans to throw Prachi out of college too. She tells the prinicipal to suspend Prachi from college. Prachi becomes depressed after being suspended from college.

In tonight’s episode, Rhea spreads the news in college that Prachi is suspended for what happened at the party. Shahana hears this and argues on Prachi’s behalf. Prachi hears everyone laughing at her and runs away from there. Shahana scolds the college students for calling Prachi a murderer.

They manage to break down the door just in time to stop Prachi from taking the pills. Pragya scolds Prachi for trying to take her own life. Pragya decides to go to Mr. Mehra and speak to him for suspending her daughter from college.

Abhi finds out that Prachi has been suspended as per Abhi’s instructions. Abhi gets angry at Rhea and decides to go to college and clear the matter. Rhea tells her friends that she was the one who got Prachi suspended because she was jealous of seeing Prachi talking to Ranbir. They say that Rhea has feelings for Ranbir.

Pragya goes to Abhi’s house where Mira tries to calm her down. Pragya tells Mira that Pragya tried to kill herself because of Mr. Mehra. Mira tells Pragya that she also lost a daughter at childbirth. Pragya sympathises with Mira and says that Rhea is lucky to have Mira as a mother.

Abhi goes to the college to talk to Rhea and tell the principal to take Prachi back in the college. One of Rhea’s friends comes in to tell her that Abhi has come to scold Rhea. Will Abhi punish Rhea for her actions? Stay tuned to find out.