Rhea says she wanted to hurt Prachi and not Pragya in the accident. Prachi gets angry and tries to slap her. 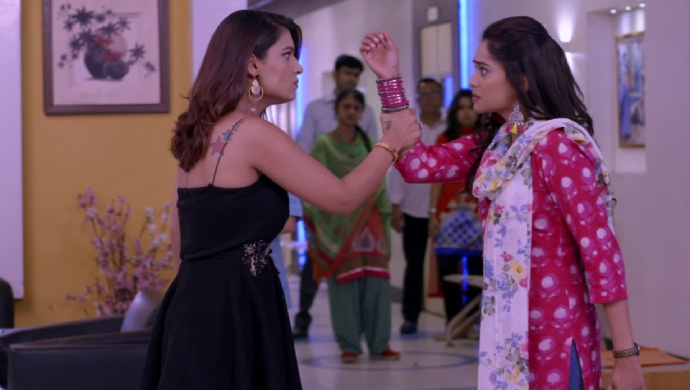 In the previous episode of Kumkum Bhagya, Prachi and Pragya are setting up their new house. Abhi meets Daadi and makes her feel better. He promises to take her to go looking for Pragya. Prachi accompanies her mother to go shopping for buying new stuff for their house. Rhea who was slapped by Prachi earlier, sees Prachi in the roadside market. She tries to ram her car into Prachi but hits Pragya by mistake.

In tonight’s episode, Prachi sees her mother in the accident and rushes to help her. The people standing nearby also try to help Prachi by calling a cab. Rhea stops the car out of shock from hitting the wrong person. The crowd gathers around her, blaming her for the accident. Everyone has seen Rhea speeding to hit Pragya so Rhea tries to leave the scene.

Abhi is just about to start his important meeting when he cuts his finger on a glass. He begins to feel worried because in his heart he is convinced that Pragya is in danger. Prachi enters the hospital with Pragya who is taken straight to the operation theater.

The people from the shop, who helped Prachi bring Pragya to the hospital, leave. Rhea tries to leave without being noticed. Prachi stops her and asks her why she tried to kill her mother. Rhea tells Prachi that she wanted to hit her with the car but hit Pragya instead.

She also says that she doesn’t regret or apologize for what happened. To her it is just revenge for the slap in college. Hearing this Prachi tries to slap Rhea again, but this time Rhea stops her. She warns Prachi to not mess with her again. Prachi swears to get revenge Rhea for trying to kill her mother. Will Pragya survive this accident? Stay tuned to find out.