Tonight on Kumkum Bhagya, the police tell Prachi they will book Riya under an attempt to murder Pragya. Abhi is on his way to the police station. 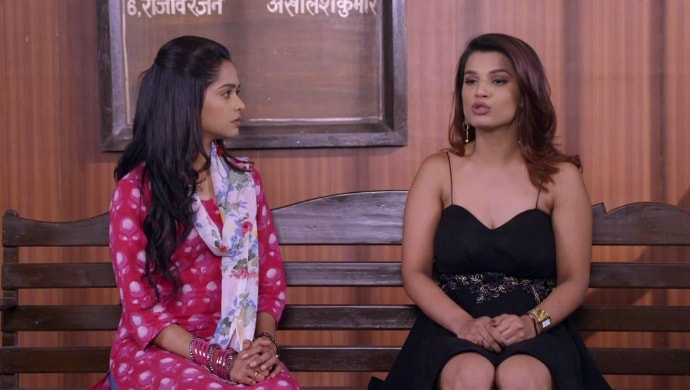 In the previous episode of Kumkum Bhagya, we saw that Riya runs over Pragya (Sriti Jha) with her car. She intends to kill Prachi (Mugdha Chaphekar) to seek revenge for being slapped by the latter. After Riya shows no regret and refuses to apologize, Prachi decides to get her arrested. Meanwhile, Abhi cuts his finger and thinks of Pragya in the middle of a business meeting. He is convinced that she is in some danger.

Tonight on Kumkum Bhagya, Prachi and Riya (Naina Singh) fight over the accident. The police arrive at the hospital to arrest the latter. She throws a fit but is taken forcefully. Prachi informs Pragya that she has punished the offender by calling the cops on Riya. Listening to this Pragya falls unconscious again leaving her daughter worried. But the nurse ensures Prachi that her mother is in deep sleep because of heavy medicines and is completely alright. Prachi gets a call from one of the witnesses who saw Riya ram into Pragya, who asks her to come to the police station to sign the FIR.

Riya misbehaves with the media who quiz her for being involved in an accident. She threatens the witness and the police against dire consequences if they don’t let her go. Riya even tries to bribe the police, which further infuriates them. The police inform Prachi that since Riya has confessed to hitting Pragya intentionally, they will book her under an attempt to murder. Prachi tries to talk to Riya, but the latter insults her and asks her to watch her back. This leaves Prachi annoyed who now swears to help the police make a strong case against Riya so that she serves a term in prison.

After Mira informs Abhi (Shabir Ahluwalia) about Riya’s arrest, he leaves to save his daughter right away. Abhi feels guilty for thinking about Pragya when his daughter needed him. Mira keeps calling Abhi again and again, this leads to Abhi getting into an accident. The person involved yells at Abhi and demands to be taken to the hospital for being hit by his car. Pragya comes looking for a cab at the same spot. But Abhi gets into a heated argument with the person whose car he hit, and a crowd gathers around them. Pragya tries to look who the person is, but she doesn’t see Abhi’s face.

Will Riya end up behind the bars? Will Pragya see Abhi finally? Will Prachi go against Abhi to punish Riya? Stay tuned to find out what happens next on Kumkum Bhagya!