Rhea gets Prachi arrested by the police for stealing her necklace. How will Abhi react to this incident? 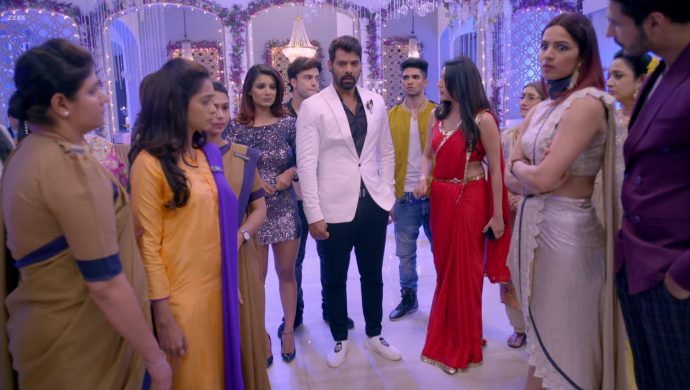 In the previous episode of Kumkum Bhagya, Rhea’s birthday celebration becomes chaotic when someone notices Rhea’s expensive necklace missing. The whole family begins searching for the necklace, including Prachi. Then Rhea puts her plan in action by accusing Prachi of stealing her necklace which she herself had planted in Prachi’s pocket.

In tonight’s episode, Aliya asks to check Prachi or else they will have to call the police. Prachi tells them to just get done with the checking and be done with it. Abhi stands in the way, stopping Aliya but Prachi stops him and asks Aliya to go ahead and check her. That way once and for all they would know that Prachi hasn’t stolen the necklace.

Aliya pretends to not know that there’s a pocket in Prachi’s dress. Then later asks Prachi herself to check her pockets. While checking the pocket Prachi finds the necklace in her pocket and is stunned. Abhi doesn’t believe it at first.

Rhea’s friends pile on the misery for Prachi while Abhi is in denial. The police enter the house at that moment and Aliya asks them to arrest Prachi. Abhi steps in and stops them from arresting Prachi. Rhea is hurt after seeing Abhi stand by Prachi.

Shahana tries to stop the police but they threaten to arrest her too and once she moves aside the police arrest Prachi and take her to the police station. Abhi keeps remembering the time Prachi showed honesty towards him. His family tries to convince him that Prachi was actually the robber.

Meanwhile, Shahana comes back to ask Abhi for help. Rhea stops Abhi from going with Shahana to the police station. Losing her belief in Abhi, Shahana runs away and tries to find help for Prachi from outside. In jail, Prachi remembers the advice that Pragya gave her about Delhi not being a good place.

Back at home Rhea boasts about how her plan worked to get Prachi punished. However, Abhi’s secretary hears her discussing this with Aliya. She walks up to Rhea and slaps her. Shahana goes against what Prachi says and calls Pragya telling her the whole incident. Pragya decides to come back to Delhi after hearing this. Will she run into Abhi in Delhi? Stay tuned to find out.

Kumkum Bhagya 3 April 2019 Preview: Abhi And Pragya Go Out To Save Prachi