Rhea has a dangerous idea, she plans to harm Prachi at the engagement party. Sarita realises that Rhea is up to something. 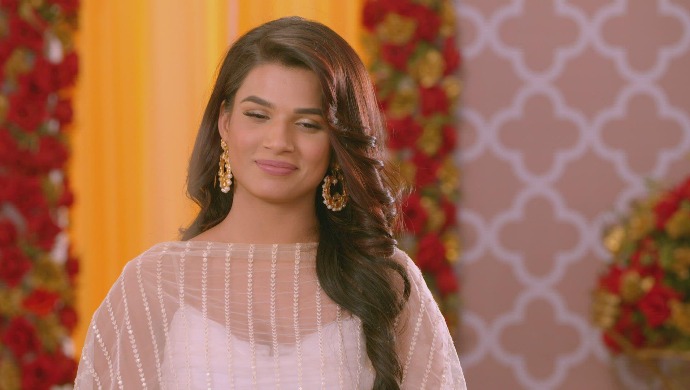 In the previous episode of Kumkum Bhagya, Ranbir and Prachi disguise as masked dancers at Maya’s engagement party to avoid being recognised. However, during their dance, the two get close and even Prachi feels different for Ranbir. Meanwhile, Sarita spots Rhea in Maya’s room and informs Pragya that perhaps she is involved with Maya to defame Ranbir. However, Pragya disregards the theory as she believes Rhea is a good girl.

Tonight, Prachi fails to spot Rhea in the room and informs Ranbir about the same. As she leaves the room, Prachi drops her earring which Ranbir picks up. He then helps her wear the earring and Rhea notices the whole romantic moment. Of course, she is not happy to see them together but has bigger concerns to deal with. Ranbir and Prachi leave the room and decide to look for Maya as they have to bring her truth out in public. Vikram is not happy with how the staff are working for the engagement party. He calls up Ranbir and asks him to assemble at the hotel to monitor the staff. But he lies to her father and says that he is not in the hotel.

Rhea bumps into Sarita, who confronts her about her presence in Maya’s room. However, Rhea lies to Sarita about why she was in Maya’s room but doesn’t miss the opportunity to insult Prachi. Rhea actually calls Prachi a robber, who likes to steal things, whether be it someone’s father or someone’s boyfriend. Sarita is shocked to hear this but Rhea controls her temper and walks away. Vikram spots Ranbir in the party and reprimands him for lying. Pragya also comes over and wonders what the two are doing at the party.

Sahana tries to cover up for Ranbir and Prachi by lying to Pragya that they are participating in a dance competition and have come to the party for the same. But Pragya catches her lie instantly and asks the two to split ways and not cause trouble to the party as it would affect Vikram’s reputation. Rhea notices everything and realises that with Prachi and Ranbir going different ways, they won’t be able to make Maya spill the truth. She also thinks it would be a good opportunity to harm Prachi.

Pragya asks Prachi to light a diya in the temple which Rhea overhears. She decides to hurt Prachi by pouring water on a wire which would conduct electricity. She believes that Prachi might end up losing her memory due to the current. Prachi heads to the hotel temple to light the diya and Rhea notices it. Just as Prachi enters the room, Rhea starts freaking out as she wonders if things might get out of control or if Prachi might die. Will Rhea be able to harm Prachi? Find out in the next episode.

#ThrowbackThursday: When Durga Jindal’s Festive Look Reminded Us Of…