In tonight's episode, Purab asks Disha to make Hritik leave her house. Disha tells him to stop controlling her life and leave if he has a problem. 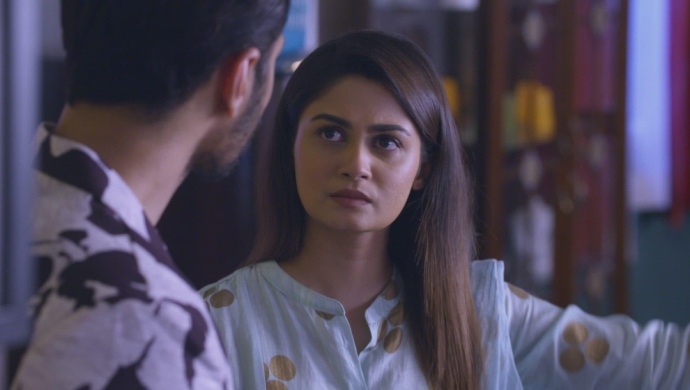 In the previous episode of Kumkum Bhagya, Prachi suggest Abhi Purab and Vikra to have coffee from the roadside stall. Ranbir tries to avoid drinking coffee but enjoys coffee with Prachi. Mithali tells Mira that she needs to prepare Rhea for when Pragya returns home with Abhi’s other daughter. Disha meets Veronica, Hritik’s ex to take back his wallet. Veronic accuses Disha to taking Hritik away from her. Priyanka forces Disha to drop him home. When they reach home Abhi sees Rishi with Priyanka and decides to check Rishi’s background.

In tonight’s episode,Disha is upset with Hritik. She doesn’t like that he told Veronica that he likes Disha just to break-up. Disha asks Hritik to stop linking her name with him. Shahana goes into her old room and walks out realising it is Rishi’s. While walking out of the room she bumps into Rishi and his helmet falls on her leg.

Shahana gets into a fight with Rishi and she says she doesn’t like him. Rishi says that even though she doesn’t like him, he thinks she is nice. Rhea wants to go for a party and needs to ask permission before going for the party. Rhea asks for Abhi’s permission. He allows them to go but warns Priyanka not to take any of the boys from office.

Rhea wants to know who Abhi is talking about. Priyanka avoids bringing up Rishi’s topic and walks away. Purab drives down to Disha’s house to meet her. He sees Hritik open the door and gets angry. When Hritik leaves the room to answer a call, Purab asks Disha why Hritik is in her house. Disha says Hritik is her friend and she doesn’t mind it.

Purab tells Disha to make Hritik leave her house. Instead Disha asks Purab to leave her house if he has a problem. Purab and Disha both feel bad about being rude to each other. Pragya asks Prachi to eat almonds and realises just like Abhi, Prachi also doesn’t like almonds. Will Purab go back to apologise to Disha? Stay tuned to find out.