In the latest episode of Kumkum Bhagya, Pragya and Abhi have a hit-and-miss moment again. Ranbir is confused about what he feels for Prachi. 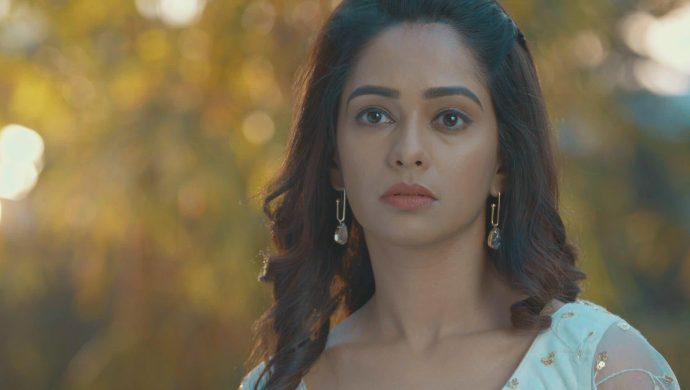 In the previous episode of Kumkum Bhagya, Pragya tries to find out if Prachi and Ranbir love each other. Prachi tells Pragya that she loves and hates Ranbir equally. Pragya then visits Mehra mansion to meet Ranbir. She asks Ranbir to close his eyes and try to picture the person he loves. To much surprise, Ranbir sees Prachi and Rhea both. Meanwhile, Abhi accidentally drops flowers on the ground. Pragya and Abhi have a hit-and-miss moment yet again. Pragya picks up the flowers and keeps them on the table.

In the next episode, Ranbir tells Pragya that he loves the girl he saw 50-50. Pragya is excited to hear this because his answer matches with Prachi’s response. Rhea, on the other hand, lies to her girlfriends about her conversation with Ranbir. She tells them that he proposed to her but she said no and he tried convincing her. Pragya meets Ranbir’s mom on her way out of Mehra mansion. Soon after Pragya leaves, Ranbir gets confused about his feelings. He finds an old necklace of Prachi’s and starts thinking about her. Ranbir then asks himself if he loves Rhea or Prachi. He even decides to quiz Prachi as to why is he seeing her everywhere.

Rhea gets tensed thinking what if Ranbir really starts liking Prachi. She decides to give him some surety that she too loves him. Shahana tries to dig deeper into Prachi’s heart and figure out if she loves Ranbir. But Prachi tells him that he is very mischievous and arrogant. She tells Shahana that he has no such qualities that will make her love him. Rhea thinks that its best she doesn’t keep Ranbir away from herself anymore.

Pragya is happy to find out both Prachi and Ranbir are on the same page. She tells Sarita that both of them are clueless about their feelings for each other. She thinks Ranbir is the perfect match for Prachi and will take care of her daughter more than she does. Pragya starts thinking about her other daughter and wishes she too finds a suitable boy. Sarita jokes that she can get both her daughters married to Ranbir since there aren’t many good guys left anymore.

Ranbir decides to test his feelings for Prachi. He tries to get closer to her but she gets pissed and asks him to move away. Rhea sees Ranbir and Prachi getting close. Ranbir runs after her and tries to explain. Rhea asks him to let her go.

You can now watch episodes of Guddan Tumse Na Ho Payega anytime, anywhere on the go, only on ZEE5.