In tonight's episode, Ranbir realises that Prachi has feelings for him too and decides that it is the right time to propose to her. 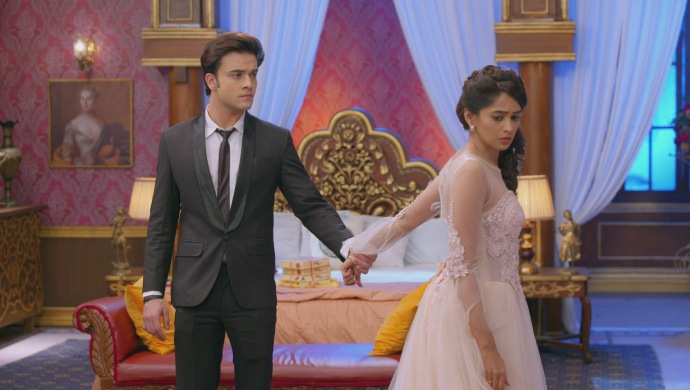 In the previous episode of Kumkum Bhagya, Prachi is unable to find Rhea in Maya’s room. Rhea is hiding and she sees Ranbir picking one of Prachi’s earrings which had fallen earlier. She puts it on her. Rhea gets jealous but she manages to escape from Maya’s room. Pragya and Vikram find Prachi and Ranbir at the hotel. Prachi lies about being part of a dance competition at the event. Pragya doesn’t believe it and suggests them to stay away from each other and not cause trouble. When Prachi goes away from Ranbir, Rhea plans to electrocute her.

In tonight’s episode, Vikram asks Ranbir to come home with him. Ranbir says he is going to stay back and help Pragya with the event. Ranbir takes trays to serve the guests but Pragya says he doesn’t need to do so much. Prachi is walking towards the Ganpati mandir to light a diya. Rhea has put a live wire in water and hides behind a curtain waiting for Prachi to step in the water.

Prachi is about to step in the water when Pragya and Ranbir pass by. Pragya shouts at Prachi and asks her to stop. Prachi feels the shock slightly before Ranbir throws the tray and moves the wire away. Pragya notices someone behind the curtain and tries to find out who it is. Rhea leaves from the window before Pragya sees her.

Abhi wishes Maya on the engagement and then asks her to not create a scene with Ranbir anymore or he will tell everyone her truth. Ranbir decides to take Prachi to a doctor. Pragya is going back to organise the party and she hears Abhi singing a painful romantic song for her. Pragya tries to reach him but he fails to notice her among the crowd.

Prachi tells Ranbir that she is fine and they need to focus on Maya. Ranbir tells Prachi that he needs to confess something to her. Abhi is taking a photo when he notices a necklace that he gave Rhea on Maya’s neck. He is shocked and wants to find out the truth. Ranbir asks Prachi to hold his hand. Will Ranbir propose to Prachi? Find out in the next episode.

This Women’s Day, We Want To Tell Preeta How We Love Her Kindness, Strength, Self-Reliance