Tonight on Kumkum Bhagya, Prachi's bags get stolen. She follows the man and reaches Abhi's award function where she gets kicked out by the guard. 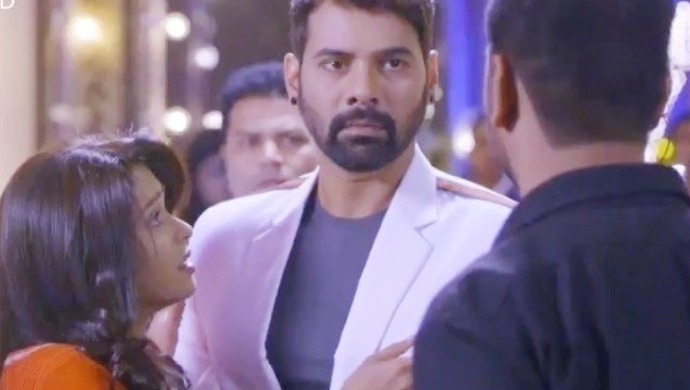 In the latest episode of Kumkum Bhagya, we saw that Prachi and her cousin leave for Delhi to attend a new college. Upon reaching Delhi, Prachi accidentally meets Abhi. Abhi almost runs Prachi and her sister over with his car. He scolds her for not walking carefully on the road. Prachi thanks Abhi for saving her life. On the other hand, Pragya gets worried about Prachi.

Tonight on Kumkum Bhagya, the episode begins with Prachi following the man who stole her bags. Prachi and her cousin try to chase him down. He enters the venue where Abhi’s awards show is set to take place. Thus, the security guard doesn’t allow Prachi to go inside. Prachi, her cousin start try to flatter the guard and pretend to be journalists. The guard falls for his trap but later discovers he has been fooled. He informs his senior who instructs him to find Prachi and her cousin ASAP.

In another scene, we see entire Mehra family in attendance at the awards function. Abhi gets awarded the Media Icon Award but he had decided to not accept it without Riya. Meera tells Abhi that Riya is on her way, but he is hesitant to accept the honour without his daughter. Meera convinces Abhi and he goes up on stage to receive the award. Abhi gives an acceptance speech saying how much he loves Riya. Meanwhile, Prachi and her cousin are looking for their bags at the venue.

Abhi says in his speech that although Riya hasn’t reached the venue, he felt like his daughter is near him. Pachi stops by and listens to Abhi’s speech. He goes on to say how he had twin daughters, but while one is with him, one isn’t. Prachi is reminded of Dadi’s conversation, wherein she had informed her that Abhi isn’t a good man. He had separated Pragya and Prachi from the other twin soon after their birth. Dadi tells Prachi that Abhi has caused a lot of troubles to Pragya. Prachi begins to wish if only she had a father like Abhi and thinks that her own father is bad.

Prachi’s cousin asks Abhi for his address for they want to send him a thank you card. Prachi also thanks Abhi for saving her from an embarrassing situation. He tells them that he recognizes Prachi from the road accident. Abhi tells her to be careful and always think about her father before doing anything. Prachi informs him that she doesn’t have a daddy but wishes she had one like her. Prachi corrects Abhi saying her mother loves her as much as he loves his own daughter.

Prachi and her cousin thank Abhi and leave the venue. Abhi begins to wonder what his other twin girl would be of the same age as her. Prachi gets hit by Riya’s car door and she walks away without even apologizing. Abhi asks Aliya if Purab had called, she denies. Riya enters the family dinner and apologizes to Abhi. Everybody tells her that she should have been there to hear Abhi’s speech. But she says she knows what he must have said, and tells him that she loves him too.

Dadi starts thinking how much Abhi loves Riya. But Riya has no time for her daddy.

In the meantime, catch up or binge watch episode of Kumkum Bhagya’s spin-off show Kundali Bhagya on ZEE5 for free.