In tonight's episode, Rhea consoles Ranbir by saying she knows he is innocent. She then offers Maya more money to put Ranbir in trouble. 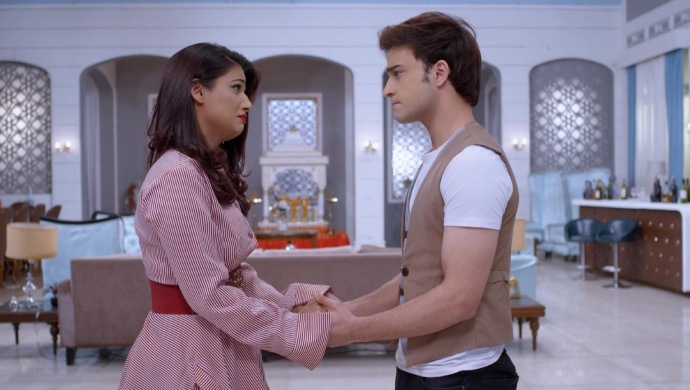 In the previous episode of Kumkum Bhagya, Prachi defends Ranbir at the police station and says he is innocent. The police refuse to release Ranbir because they are convinced that he tried to molest Maya. Prachi and Shahana inform Pragya that Ranbir went to jail. Pragya goes to the police station and tells Ranbir that everyone knows he is innocent and they will get him out. Rhea tells Aliya that her plan failed because Prachi still trusts Ranbir. Aliya tells Rhea to continue with their plan by asking Maya to fake her suicide. Abhi and Vikram release Ranbir on bail. Ranbir immediately rushes to Maya’s house to confront her.

In tonight’s episode, Abhi takes Ranbir away from Maya’s house and tells him to refrain from meeting her. Rhea was hiding behind Maya’s door when Ranbir tries to enter. She is afraid that someone will actually find her with Maya. Rhea decides to leave Maya’s house but she says that she will wait for Maya’s call to go ahead with the fake suicide plan.

Ranbir reaches home and says he wants to go to the office. His mother is against him leaving the house. Ranbir says that if he stays at home everyone will think he is guilty. Abhi also suggests Ranbir should go to the office so that it takes his mind off the case. Rhea goes to Aliya and says that Ranbir and Abhi almost caught her. She even says that Maya refused to fake her suicide.

Aliya says that she has to take an important business call and promises to deal with Rhea’s problem later. Rhea goes out and finds that Ranbir is going to the office. She tries to console him. Ranbir says that he deserves this because he always behaves like a playboy. Ranbir hugs Rhea when she supports him. Rhea thinks Ranbir is in love with her again. She offers Maya more money to fake her suicide.

When Ranbir goes to the office his female staff keeps a safe distance while greeting him. Prachi proves to them that Ranbir is innocent. When Prachi enters his room, Ranbir thanks her for defending him. Prachi says she is upset because he didn’t take her advice to stay away from Maya. She is also confident as she knows that Ranbir would not do anything wrong. Will Rhea succeed in breaking Prachi’s trust? Find out tomorrow.

Valentine's Day 2020: 20 Songs That Remind You Of Love, Heartbreak And The Pain Of Parting

Kumkum Bhagya 24 January 2020 Preview: Pragya Agrees To Go On A Date With Abhi