In tonight's episode, Abhi and Purab find Sanju at the cafe and chase him. Aliya and Rhea see Abhi chasing Sanju and get anxious. 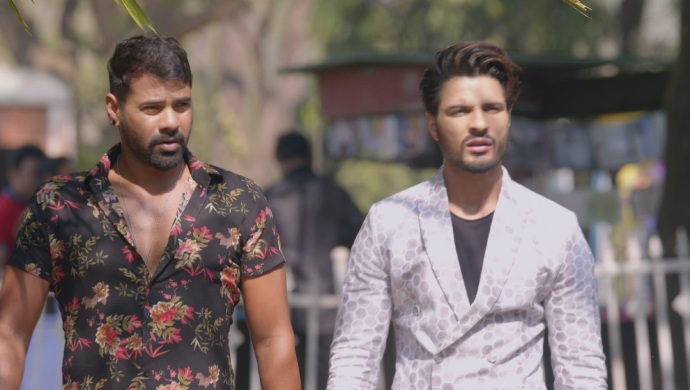 In the previous episode of Kumkum Bhagya, Vikram returns home and tells his wife Pallavi how Prachi dealt with everyone in the office. Pallavi is happy as Ranbir found good friend in Prachi. They decide to go to Prachi’s house to thank her and her mother. Rhea gets jealous as she observes this and tells Aliya that she also wants to see what Ranbir’s parents are conspiring. Purab calls up Pragya and sets up a date with Abhi in a coffee shop. Ranbir calls up Pragya saying he wants to go out for coffee with her and Prachi too. Pragya is worried about missing her date when Vikram calls up saying he wants to meet her too.

In tonight’s episode, Mira overhears Abhi planning to meet his wife. She gets upset and goes into her own thoughts. Mira slips on staircase and hurts her arm. Abhi tries to help her and calls a doctor, but Mira says she is allergic to medicine. Abhi asks her to speak to Prachi’s mother as she is expert in home remedies.

Pragya talks to Mira and Abhi leaves with Purab for his date. Prachi and Ranbir are walking towards her house when a bicycle almost runs into Prachi. Ranbir pulls Prachi aside and she falls into his arms. Shahana watches them hugging. She realises that Ranbir is in love with Prachi. When Ranbir enters Prachi’s house, he finds his parents have already arrived.

Pragya is worried because she is getting late for her date. Abhi and Purab are sitting in the cafe waiting for Prachi. Purab notices Sanju shouting at a waiter in the cafe. Sanju sees Abhi and runs away while Abhi chases him. Aliya and Rhea are on the way to Prachi’s house and the see Abhi chasing Sanju. They take Sanju in their car while Abhi sees Aliya driving away with Sanju.

Prachi and Ranbir fight as the latter slips on a small puddle of water in the kitchen. Prachi thinks Ranbir is blaming her for his fall and gets into a petty argument with him that everyone in family laughs about. Aliya drops off Sanju when she is sure Abhi is not following her. Sanju tells them that he knows the reason why they saved him. Will Aliya use Sanju’s help again? Find out tomorrow.

Karan Wahi To Host Game On: All You Need To Know About The Television Hottie,…