Prachi and Shahana get ragged by Rhea on their first day of college. 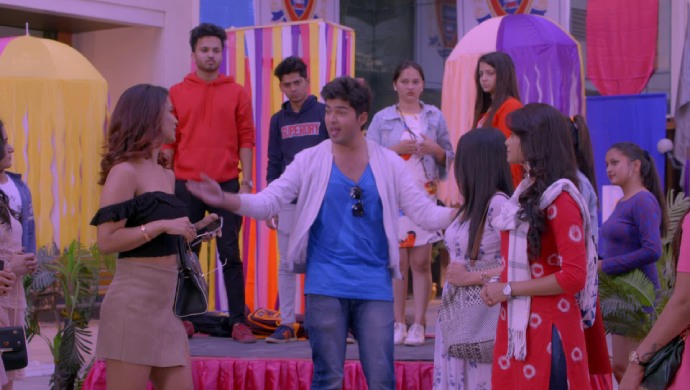 In last week’s episode of Kumkum Bhagya, Prachi and Shahana have lost the bag and money with no idea how to get home. Abhi comes to their rescue and drops them to their uncle’s place. They forget their phone in his car and Pragya calls them up. Abhi picks up Pragya’s call but because of poor call quality they couldn’t understand who was at the other end.

Tonight’s episode sees Abhi drop off the phone at Prachi’s uncle’s place and leave without expecting an thank you. Their aunt who gives them leftover food asks them to call their uncle if they need anything. Prachi and Shahana are not disappointed instead look forward to their first day of college.

Meanhwile, Pragya and Abhi both are thinking about the phone call and why the voice on the other end sounds familiar. Pragya is also worried about Prachi meeting her father Abhi, in Delhi. Pragya’s mother tells her not to worry since Prachi hates her father and will only focus on her studies. Pragya then decides to visit the Gurudwara and pray for Prachi and Shahana to have a great first day in college.

On the first day of college they are looking around the campus. Meanwhile, Rhea also enters the college in her car where her friends come over to greet her as she exits the car. She then judges a row of guys based on their looks and is unimpressed by all of them. Then while hanging out with her friends she gets called to rag the new students.

Among the group of students are Shahana and Prachi as well. When Prachi introduces herself they ask Prachi to slap the college nerd as part of her punishment. Shahana saves Prachi by saying that if Prachi slaps the nerd then Rhea has to go and kiss him too.

Rhea is indecisive about it but then agrees to Shahana’s conditions. Prachi then is left with no option but to go and slap the college nerd. She convinces him to take the slap so that he can enjoy the kiss with Rhea later. Stay tuned to know if Rhea completes her end of the challenge as well.