Pragya hears Abhi's voice as he leaves her house. She rushes out of the door to see if it is him. 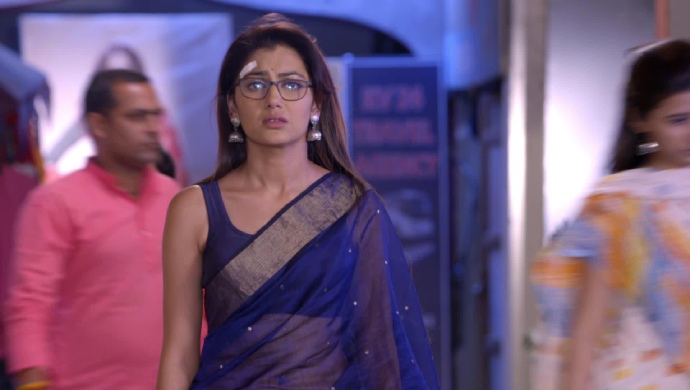 In the previous episode of Kumkum Bhagya, Abhi takes Rhea to Prachi’s house. However, he ends up in the wrong house. When he gets the right address he goes to the house. When he reaches Prachi’s house, Pragya is in the bathroom washing clothes. Rhea goes in the house and apologises to Pragya and Prachi. Meanwhile, Abhi finds earrings similar to the ones Pragya wears, in Prachi house and begins having doubts.

When Rhea comes back to the living room she says that she apologised to Prachi and Pragya. Abhi confirms this once with Prachi. He also says that he will apologize to Pragya personally. However, Rhea has already left by then. Abhi apologises for Rhea’s behaviour and leaves to bring her back.

Pragya hears him speaking while he is leaving. She rushes out to see if it is him. Abhi finds Rhea near the car. She insists on leaving right now. She promises to come back tomorrow and say sorry. Abhi gives in to her wish and they leave in the car. Just then Pragya comes out but doesn’t find Abhi anywhere.

Ranbir is boxing when his cousin brother enter his room. Ranbir tells him to try hitting the punching bag. The cousin brother ends up punching Ranbir instead. He asks Ranbir to teach him some skill so he can impress girls. Ranbir tells him that there is no reason to learn a skill. He is confident to find a girlfriend for his brother just by saying he is Ranbir’s brother.

When they are in college, Ranbir asks his brother to choose any girl he wants. Ranbir plans to woo the girl first then become a bad boy and ditch her. Then his brother can step  and be the nice guy whom the girl will immediately like. His brother is unsure of this plan.

Pragya heads out for a job interview where she see a woman whose sari is hanging out of the door. She follows the car and stops it. She scold the woman for being careless with her sari. The woman, who is actually Mira, feels happy that someone cares about her.

Meanwhile, Ranbir tries speaking to the girl in the canteen. His brother who liked the girl thinks Ranbir messed up the conversation when the girl walks away from the table to sit with some other guy. Will Ranbir’s plan work for his brother? Stay tuned to find out.