In tonight's episode, Prachi is tying a bandage for Ranbir when he shuts his eyes and dreams he loves Prachi and not Rhea. 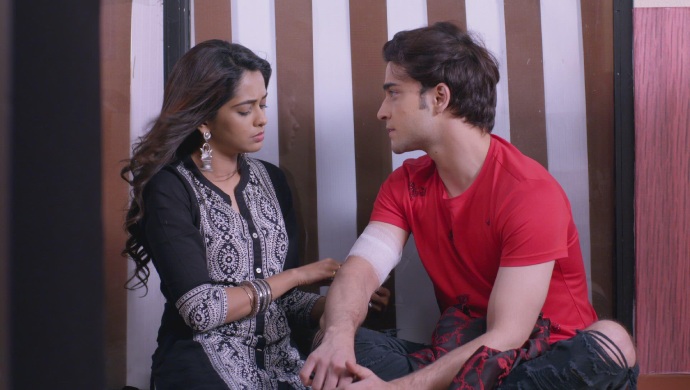 In the previous episode of Kumkum Bhagya, Prachi saves Rhea but they keep fighting and end up getting caught. Abhi and Vikram find out that Ranbir and Vikram are at the bank which is getting robbed and rush the bank immediately. Pragya also sees the news and decides to go because Prachi said she would be there. Ranbir gets a call from Abhi and Pragya both where he promises to save Rhea as well as Prachi. Ranbir is captured and the robbers decide to keep Rhea, Ranbir and Prachi as hostages. Ranbir has a chance to save Rhea but he chooses to save Prachi first and begins beating up the robbers. The police show up and arrest the gang while Rhea finds Prachi taking care of Ranbir who is wounded again.

In tonight’s episode, Prachi takes Ranbir aside to tie a bandage on his arm. Rhea watches this happen and is upset. Pragya reaches the bank and sees Rhea first. She hugs Rhea and asks if she is safe. Pragya tries to ask if Rhea is alright, instead she responds rudely asking Pragya to look at Prachi first. Pragya tries to console Rhea but she goes away without saying anything.

Pragya realises why Ranbir made such a silly mistake. Even Ranbir admits he couldn’t stop looking at Prachi but then changes it into an argument so Prachi doesn’t realise anything. Rhea refuses to go with Ranbir in his car but Pragya convinces her to join them. When Rhea sits in she hopes Ranbir will see her anger but he keeps looking at Prachi in his rear-view mirror.

When they reach home, Pragya invites Rhea home for lunch sometime. Rhea goes home and everyone gives her a warm welcome. Ranbir comes home and tells everyone how he saved Rhea and Prachi. Abhi finds out that Prachi helped Ranbir when Rhea ran away. Ranbir goes to his room but cannot stop thinking about Prachi. Will he decide to tell Prachi his feelings? Stay tuned to find out.

Exclusive! Harleen Sethi: It Was Surreal To Dance To My Own Rendition Of Teri…