In tonight's episode, Ranbir decides to tell Prachi he loves her and he meets her while he is driving to her house. 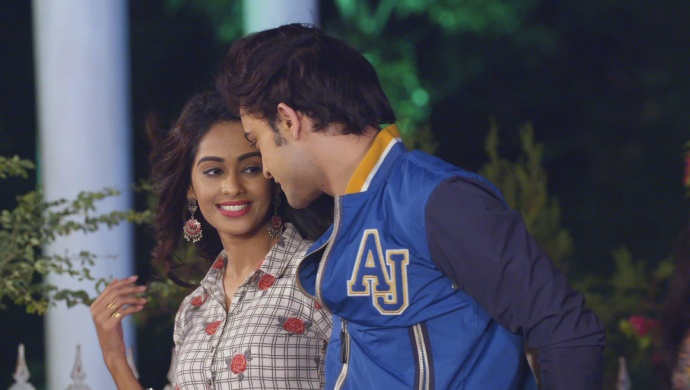 In the previous episode of Kumkum Bhagya, Prachi takes Ranbir aside to tie a bandage on his arm. Rhea meets Pragya and rudely asks her to check on Prachi first. Ranbir sees that Prachi wounded her hand and wants to tie a bandage for her as well. But he is so lost in his feelings for Prachi that he ties it on the wrong hand. Ranbir offers to drop Rhea home along with Prachi and Pragya. Rhea initially refuses to go but Pragya convinces her. Pragya invites Rhea home for lunch anytime she is free. Ranbir and Rhea go home but Ranbir cannot stop thinking about Prachi.

In tonight’s episode, Rhea goes to her room and cries bitterly. She is certain that Ranbir is in love with Prachi. She puts make up on her face which smudges because she is crying. She begins talking to a stool thinking it is Ranbir. She asks Ranbir to say that he still loves Rhea but gets angry when the stool doesn’t respond to her.

Ranbir dancing in his room because he realised that he loves Prachi. He talks to himself in the mirror and decides to tell Prachi that he loves her even if she doesn’t believe him. Ranbir puts on his nicest clothes and goes outside to propose to her. Ranbir drives to Prachi’s house when he passes by a stranger on the street and sees Prachi’s face in his mirror.

He steps out of his car and begins dancing with a random stranger. Aryan finds Ranbir dancing with another man and takes him aside. Ranbir says he thought that the man was Prachi. Aryan takes Ranbir to a restaurant to eat, where Ranbir finds the valet and his waitress both looking like Prachi. Aryan is certain that Ranbir is really in love with Prachi.

Ghar Grihasti Aur Glamour Awards: The Award For ‘Top Secret Wedding Of The…

Kumkum Bhagya: Who Do You Think Ranbir Is In Love With - Rhea Or Prachi?