In tonight's episode, Prachi convinces Ranbir to tell Maya that he wants to marry her and hopes that Maya will confess her crimes. 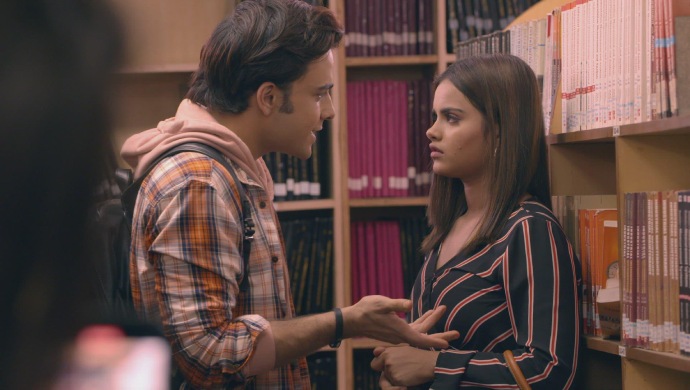 In the previous episode of Kumkum Bhagya, Ranbir’s father Vikram feels that no one can get him out of trouble now. Abhi says he knows a politician who is more powerful than Maya’s father. He decides to ask him for help in stopping Ranbir’s engagement with Maya. When Ranbir drops Prachi home she feels like her plan went wrong and put Ranbir in more trouble. She promises to get him out of this mess soon. Prachi tells her family that she doesn’t know how she is going to help Ranbir without any plan. Aliya tells Rhea to call up Maya and make her back out of the engagement but Maya ignores Rhea’s calls.

In tonight’s episode, Sarita tells Prachi that Ranbir should surprise Maya by telling her that he actually wants to marry her. Sarita says that maybe Maya will trust Ranbir and admit her fault and also reveal the person who told her to do all this to Ranbir. Prachi thanks Sarita and runs to college and tells this plan to Ranbir.

Rhea tries to call Ranbir on her way to college but her mother says that Maya is in college. Prachi tells Ranbir to bring Maya to the library where she will wait for them and record their conversation. When Ranbir brings Maya to the library he convinces her that he wants to marry her. He asks her to tell everyone that they are in love and not getting married because of the molestation case.

Ranbir asks Maya to tell her why she went to such an extent to marry him. Maya gets scared and runs away. Ranbir gets angry and shuts the door in anger. The door gets jammed and doesn’t open after that. Ranbir and Prachi call for help but cannot find anyone because the sports day is going on and no one is inside college.

Maya meets Rhea on her way out of college. Rhea scolds Maya for ignoring her calls all day. She tells Maya to tell her father that she doesn’t want to marry Ranbir. Maya says that she cannot do that because now she wants to get married to Ranbir too. Rhea hears this and slaps Maya. Will Maya ruin Rhea’s plan and marry Ranbir? Find out in the next episode.

It Happened In Calcutta Trailer: A War And An Epidemic Tests…

Prachi-Ranbir Or Rhea-Ranbir: Who Will Win This 'Pyaar Ki Jung' In Kumkum Bhagya?

Kumkum Bhagya 2 March 2020 Preview: Ranbir And Prachi Are Locked In The Library All Night?