Rhea places her expensive necklace in Prachi's pocket to blame her for robbery. Will her plan work? 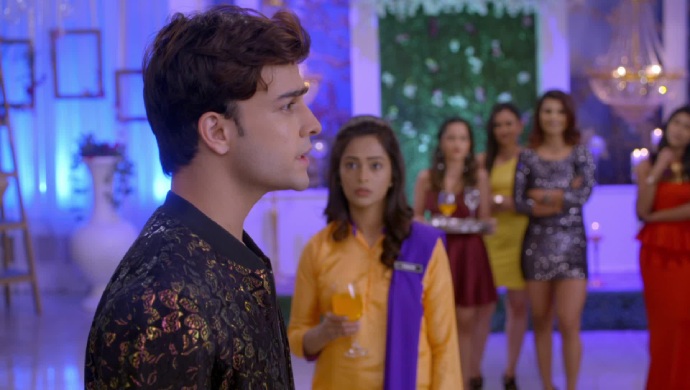 In the previous episode of Kumkum Bhagya, Prachi runs into Abhi’s nephew, Ranbir, at the party. She also runs into Rhea who tries to rag her. Prachi again wins against Rhea and also wins the respect of Rhea’s friends. Meanwhile, Prachi starts to remind people of Pragya in Abhi’s house. Rhea swears to ruin Prachi’s birthday in return for her birthday being ruined.

In tonight’s episode, Rhea goes to Aliya complaining about the insult she suffered from Prachi again. Aliya gives her a plan which she is confident will work. Daadi sends Prachi to call Abhi down for the cake cutting. While watching Prachi, Daadi takes Pragya’s name because she is reminded of her.

Prachi enters Abhi’s room to see him struggling with finding the right clothes to wear. She helps him pick out the best clothes to wear by using Pragya’s advice, which Abhi remembers instantly. He thinks back to the time Pragya asked him to wear an outfit using the exact same advice of eating for yourself, but wearing clothes for others.

Meanwhile, Ranbir is playfully flirting with his daadis and complimenting on their looks. His sister steals him away  and asks him to sing. Hesistantly, Ranbir decides to sing. While watching Ranbir’s dance performance, Aliyah instructs Rhea to put her expensive necklace in Prachi’s pocket.

While she is at the party, Prachi helps a guest solve their neck problem with a small massage. Seeing her gain popularity Aliya and Rhea decide to put their plan into action. They plan to wait for everyone to notice Rhea’s necklace missing. Will they succeed in their plan of framing Prachi for robbery? Stay tuned to find out.