In tonight's episode, Rhea tells Sanju that she will make Prachi's MMS clip without using him or Prachi in it. Find out her plan here. 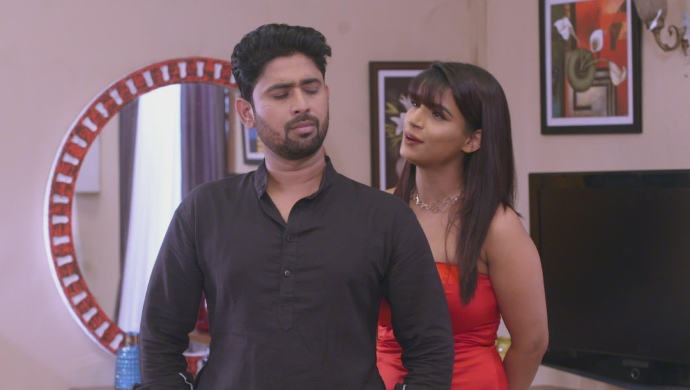 In the previous episode of Kumkum Bhagya, Ranbir and Aryan go to Prachi’s house but they decide to not talk about his proposal beforePrachi brings it up. Pragya welcomes Ranbir home and sees him nervous. She realises he wants to propose to Prachi. Ranbir asks Aryan to find out from Shahana if she knows about Ranbir and Prachi. Shahana says everyone at home knows about them. Aryan thinks Ranbir did propose to Prachi. Ranbir decides to ask Prachi what she told him yesterday. Prachi says that she told him yes. However, Ranbir doesn’t know Prachi said yes to bring a file to work that he asked from her yesterday.

In tonight’s episode, Ranbir tells Prach thati he will convince her family  that he is a good person. Prachi is confused and asks Ranbir if he is still talking about the loan documents. Ranbir realises that he didn’t propose to Prachi. Ranbir and Aryan rush outside and Ranbir says that nothing happened there last night and they need to leave.

Rhea is at Sanju’s house and tells them that she has a plan to make Prachi’s MMS and spread it   in college. Rhea says that her plan doesn’t require Prachi or Sanju to actually be involved in the video. She says that she will find someone who looks like Prachi and Sanju and then morph their faces on them. Sanju is happy with the plan but his friend Bittu is doubtful about it.

Rhea comes with her friends Rusleen and Yuvi to act in the  MMS. Sanju says that they will need to wear clothes like Prachi if they want the MMS to look realistic. Rhea promises to get Prachi’s clothes that very night. Ranbir is worried that he will not be able to be with Rhea anymore. He calls her to tell her this but Rhea says she is busy and cannot talk to him.

Aryan makes fun of Ranbir for not properly proposing to Prachi or breaking up with Rhea. Abhi hopes that Rhea will change if she starts withRanbir. Rhea steals Prachi’s clothes from her house and goes back to her home without getting caught. Rhea promises to win Ranbir back from Prachi. Will Rhea succeed in her evil plans against Prachi? Stay tuned to find out.

Happy Birthday Gul Panag: Thank You For Being YOU, Living By ‘You Do…

In tonight’s episode of Kumkum Bhagya, now streaming on ZEE5.

5 Major Twists We'd Like To See On Kumkum Bhagya, Kundali Bhagya And Other Zee TV Shows