Prachi goes to temple where she meets Abhi and Daadi just when Daadi is praying to meet her other grand-daughter. 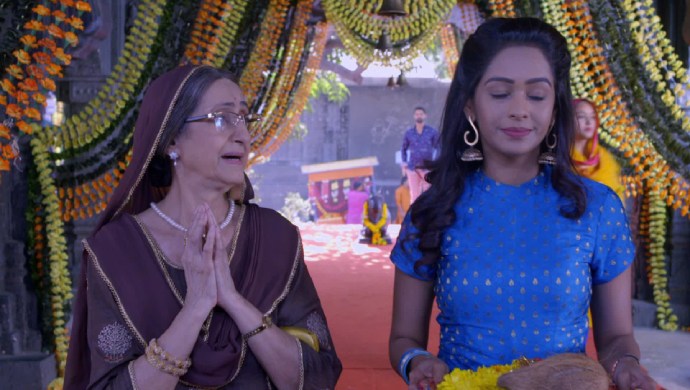 In the previous episode of Kumkum Bhagya, Pragya hears that Abhi is at her door. She rushes to catch a glimpse of him. However, Prachi is already talking to him and blocks Pragya’s view. Pragya then declines Sarita’s offer to be paid for the order. Sarita accuses of Pragya of wanting to steal the house from her. Pragya tells Sarita that they like her a lot. Abhi tells Daadi that he feel Pragya is somewhere around him too.

In tonight’s episode, Pragya enters the Mehra Mansion where the party is happening. Mira sees her standing there looking around. Pragya notices Mira and they talk for a while. Pragya sees Mira making rangoli just like she used to make earlier. She asks Mira where the kitchen is and goes there to start her work as a caterer for the evening.

Abhi takes Daadi to the temple where is praying from Pragya and Abhi to come back together. Abhi sees Prachi also entering the temple. Prachi says she is there to say thanks on behalf of Sarita who got a big order from Abhi. Prachi meets Daadi in the temple at the exact moment when Daadi asks God to let her see her other grand-daughter.

Shahana is training the helpers to become waiters. Rhea sees her in the house and gets angry. Shahana tells Rhea that she is the caterer for the evening. She also does her best to avoid a fight with Rhea. However Rhea is still mad because Shahana told people in college that Rhea came to Prachi’s house and apologised to her.

Prachi runs into Ranbir while she is helping set up the wedding. They both have an argument again after Ranbir throws her plate with flowers in it. Ranbir tells Prachi that she keeps finding ways to talk to him. He also says that Prachi must be thinking about him a lot. Prachi laughs off his claims and insults him before leaving.

Pragya sees Sarita aunty feeling week and gives her water and a medicine. Prachi also enters and gives Sarita prasad from the temple. She then tells Pragya that she seen Rhea’s father at the temple. She also talks about how sweet Daadi was to her. Pragya decides to meet them once after all the work is done. Stay tuned to find out if Pragya meets Abhi and Daadi,