In today's episode, Sarita tells Mira that Pragya is her real daughter named Anuradha or Anu. 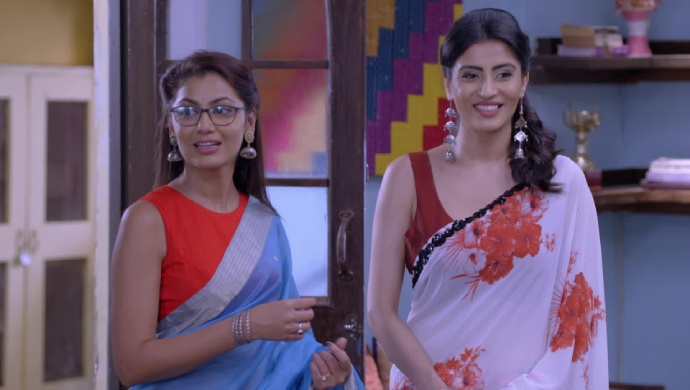 In the previous episode of Kumkum Bhagya, Abhi starts doubting his parenting skills after he finds Rhea lying. He wishes that Pragya would be there to raise Rhea properly. Meanwhile, Rhea is upset with Abhi because he slapped her and supported Prachi. Later she goes to apologise to Abhi, but he doesn’t accept her apology. Abhi still blames Pragya for Kiara’s death but he also misses her.

In tonight’s episode, Abhi watches Rhea sleep and says that he is angry with her but he still loves her. He goes back to his room and finds one of Kiara’s toys. He gets emotional as it brings back memories of his family, which he has now lost. He wishes for Pragya to come back to him.

Mira sees Pragya in the market and decides to give her a lift home. Mira tells Pragya her name but because of an interruption Pragya is stopped from saying her name. When Pragya reaches home she asks Mira to come in for a cup of coffee.

When they are in the house Sarita tells Mira that Pragya is her actual daughter, Anuradha. Mira believes Sarita and asks Pragya if she call her ‘Anu’. Mira’s older sister was also called Anu but she passed away and Mira feels Pragya is like her older sister. Mira also likes Pragya’s coffee and says Mr. Mehra really likes it too.

Prachi thinks that the wedding anniversary she attended must have been from Mr. Mehra’s second marriage, where he liked her coffee. She assumes that Rhea behaves the way she does because she doesn’t like her new mother. Meanwhile, Mira notices that Prachi and Rhea are similar is a lot of ways.

Stay tuned to find out how Prachi and Rhea behave with each other on their college trip. Watch the latest episode of Kumkum Bhagya, now streaming on ZEE5.