Abhi manages to get Prachi out of jail, while Pragya restores Prachi's character. 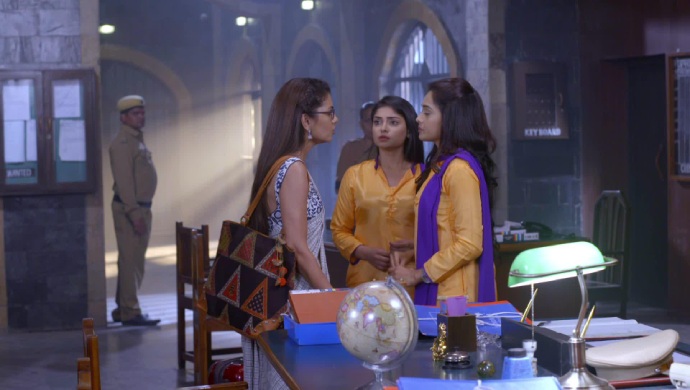 In the previous episode of Kumkum Bhagya, Prachi and Shahana get help from Abhi. He shows up and deals with the tough cop who says that Prachi won’t be released, so that he gets a promotion. Abhi decides to call the media and tell them about the corrupt practices of the cop. Will the police relent and let Prachi leave?

In tonight’s episode, When Abhi calls, the media responds by showing up to the police station. The police stop them from going inside and meeting Abhi. Realizing that he needs to try something else, Abhi decides to go live on social media talking about the incident to all his followers.

In this time, Pragya also reaches the police station. The police mistake her to be with the media and stop her from entering in. She explains that she is Prachi’s mother and the police ask her to stand  outside because Prachi’s case is the cause of all the commotion in the first place.

When Abhi hears that Prachi’s mother is waiting outside and not being let in, he gets angry. He goes out to make sure that Pragya can come inside as well. When he reaches outside Pragya has already left to find a different route to get inside the police station. Instead of the mother, Abhi takes the entire media into the police station.

The reporters begin to ask tough questions to the policeman. Under the pressure from the media, the inspector says that he has already told that Prachi be released. All they need is for the person who called and made the complaint to take the complaint back.

Prachi runs to Abhi and hugs him when she is taken out of jail. Abhi tells them to not thank him. He was just doing what was right. While leaving the police station, his hands brush past Pragya’s. However the media surrounding them stops them from seeing each other. Although, they both feel different for a minute. Pragya meets Prachi and demands to know who locked her up. Pragya then goes to the inspector and asks him to apologise to Prachi on camera for the way her treated her. How will Rhea react when she finds out that Prachi is out of trouble? Stay tuned to find out.