In tonight's episode, Ranbir tries to propose to Rhea during a college dance but ends up dancing with Prachi. 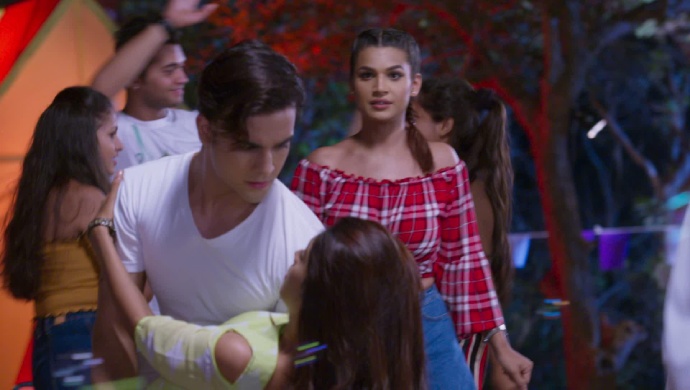 In the previous episode of Kumkum Bhagya, Abhi goes to visit Prachi’s mother. Before Pragya sees Abhi the lights go off. Because, Abhi has a cold his voice sounds hoarse. Preeta hears Abhi’s voice and thinks he is a robber. She beats up Abhi and runs out to call the police. Abhi meets the actual robber in the house whom he gets arrested. Ranbir tries to propose to Rhea but he ends up proposing to Prachi instead.

In tonight’s episode, Abhi gets Pragya’s robber arrested and leaves before Pragya returns home. Shanti Bua also shows up and gets worried that something happened to Pragya. Mira also calls up and finds out that Prachi beat up a robber in the house.

Rhea and Prachi are playing on opposite teams in Dumb Charades. Prachi manages to get the names right of alkl the old and lesser known movies. Ranbir steps up and decides to act out popular movies which Rhea likes. However Prachi again guesses these movies before Rhea.

Ranbir decides to start a dance session with all the college students to propose to Rhea. Ranbir is dancing with Rhea at the camp. Prachi is dancing behind them and is about to sleep. Ranbir sees Prachi about to fall and holds her in his arms. Rhea sees Prachi in Ranbir’s arms and gets angry.

Abhi returns home where he tells Rhea that he stopped the robber. Mira mentions that Pragya said, she beat up the robber. Abhi calls Pragya a liar and says that she doesn’t know whom she beat up. Pragya thinks Mr. Mehra didn’t show up to her house and lied to her about visiting. She calls Mr. Mehra a liar too.

The next morning all the college students are getting ready for the hill hike. Rhea tells her friends to call Prachi to the hill. She wants them to click a video of Prachi throwing Rhea down the cliff. One of the friends tells Prachi to meet a teacher near the hillside. Will Prachi step into Rhea’s trap? Stay tuned to find out.