Pragya enters Abhi's room to give him coffee and ends up choosing his clothes for him too. 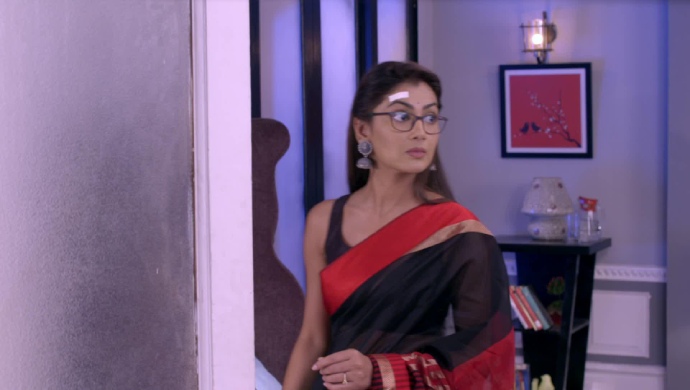 In the previous episode of Kumkum Bhagya, Abhi takes Daadi to the temple. There they meet Prachi who also has come there to pray. Shahana decides to take over the waiters and tell them how to serve. Rhea sees her and gets into an argument. Prachi meets Ranbir at the party and ends up arguing with him. Prachi tells Pragya that she met Abhi and Daadi. Pragya decides to meet them before the party is over.

In tonight’s episode, Pragya goes with the coffee for Abhi. He tells the people to enter the room, Abhi is in his room trying to pick clothes for the party. When Pragya enters the room he is in the washroom. Pragya keeps the flask of coffee for Abhi. While she is there she even picks out his clothes for him. Abhi comes out and tastes the coffee Pragya left for him. He gives his friend a little to taste before taking it all for himself.

On her way back, Pragya runs into Ranbir’s mom by mistake. She ends up talking to her for a while. Aliyah is walking down the stairs and sees Rnabir’s mom talking to someone she recognizes. She moves closer to see who it is. Just then Sarita calls Pragya to continue the party preparations. Pragya leave before Aliyah can see her.

When the party starts Abhi is standing with his friend who’s anniversary it is. Daadi begins to talk about her bahu Pragya. Everyone likes to listen to stories about Pragya. However Abhi gets uncomfortable and decides to leave the conversation. Purab sees him leaving the party room and follows him. Abhi tells Purab that he always feels something is missing in his life. Purab says that knows what Abhis misses is Pragya.

Pragya and Sarita are preparing food when Sarita gets a call saying the tomatoes won’t be delivered. Pragya tells Sarita to go and bring the tomatoes she will handle the party. Sarita asks if she has an previous experience. Pragya tells her that she was from a big and rich family where she organised many parties like this. Stay tuned to find out if Pragya is able to handle the party by herself.