Kumkum Bhagya 7 January 2020 Preview: Prachi Finds Our Everyone Has Seen Her MMS Clip

In the next episode, Prachi finds a fake MMS clip of her and Sanju, the one made by Rhea, has been sent to everyone in college. 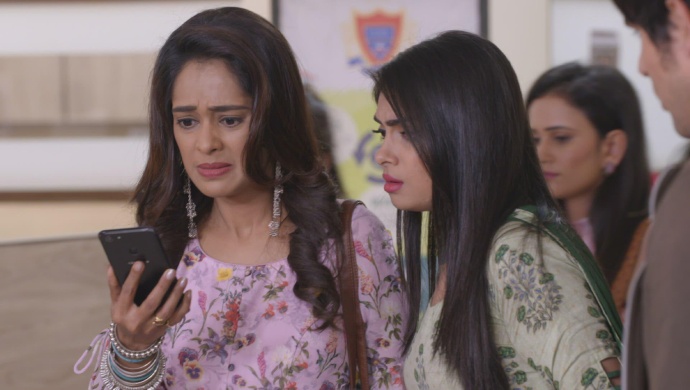 In tonight’s episode of Kumkum Bhagya, Prachi tries to follow the girl who is wearing her dupatta. Rhea helps Roshlyn hide from Prachi. Rhea is worried because she has less money. Roshlyn demands the entire money by tomorrow or she promises to tell Prachi the truth. Prachi asks Sarita to check whether her dupatta is in the cupboard. Sarita says she will do it but gets distracted by work. Ranbir tells Prachi he will drop her home. Rhea goes to Prachi’s house and Pragya welcomes her. She puts Prachi’s dupatta back in the drawer. Rhea speaks to Pragya and almost decides to give up the plan of sharing Prachi’s MMS. While leaving Rhea sees Ranbir trying to propose to Prachi and then stop. She gets angry at Ranbir and shares the MMS.

In the next episode, Prachi goes to college the next day where one of the boys in college shows her the MMS clip. Prachi is stunned and on the verge of tears. She throws the phone in anger. The boys in college get angry at her, saying she should not get angry at her own mistake. one of the boys even says girls like Prachi did this for publicity. Will Ranbir also leave Prachi because of this? Stay tuned to find out.