In tonight's episode of Kumkum Bhagya, Abhi and Pragya ask each other about their daughters and hug again. 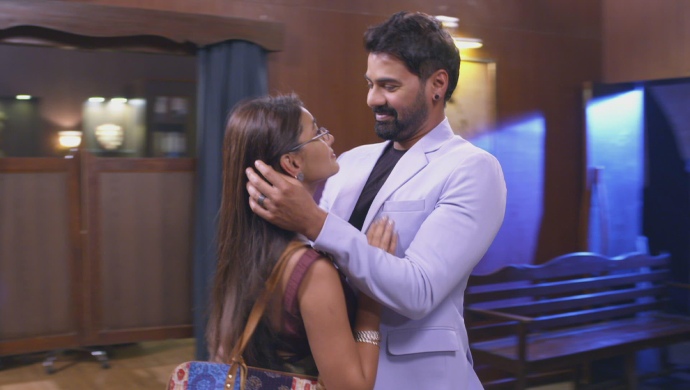 In the previous episode of Kumkum Bhagya, Madhu who is helping Sarita, lies to her saying Pragya and Rishi are gone out to eat. Rhea takes Priyanka to the terrace where she is having a pajama party with her friends. Aryan and Ranbir find them on the terrace and join their game too. The game is of saying one truth and one lie and others have to guess which is which. Priyanka says both truths about being madly in love with Rishi and wanting to ruin his life. However no one believes her.

In tonight’s episode, Pragya asks them to open Rishi’s jail cell. She sees Rishi hiding his face from her and gets worried. When she turns him around he sees him bleeding and wounded. Abhi is asked to bring Priyanka to the police station. Priyanka cries and pretends to be scared of the police and Abhi asks her to stay at home itself.

Rishi tells Pragya everything that happened between him and Priyanka. He explains that he was the one who was molested not Priyanka. The havaldar outside asks who will believe Rishi. Pragya says she believes Rishi and can prove it too. Rishi says Priyanka comes from a big family and no one will help him now.

Pragya decides to first handle Priyanka’s uncle who beat up Rishi. Abhi calls a doctor to check on Rishi’s health. Pragya steps out and finds Priyanka’s uncle. Abhi has his back turned away from Pragya when he hears her call him. Abhi doesn’t turn at first. Pragya gets angry saying rich men like him like to take the law in his hands.

When Abhi turns and they both see each other. Pragya runs in and hugs Abhi. they stay like that crying happily. They find out how each other is doing. They asks about each other’s daughters and hug again. While talking to Rhea, Priyanka says that the person she loves has to be with her. Otherwise she won’t let him be with anyone.

Rhea is worried about what Priyanka is saying. The doctor Abhi called, interrupts Abhi and Pragya. He says that Rishi might have internal bleeding and he will need more time. Pragya is shocked realising that Abhi is the one who beat up Rishi. Watch what happens when Abhi and Pragya fight over Rishi tomorrow.

Simmba, Singham Or Chulbul Pandey – Your Favourite Cop From…

Kumkum Bhagya’s Ashlesha Savant Shares A Picture With Her ‘Real…