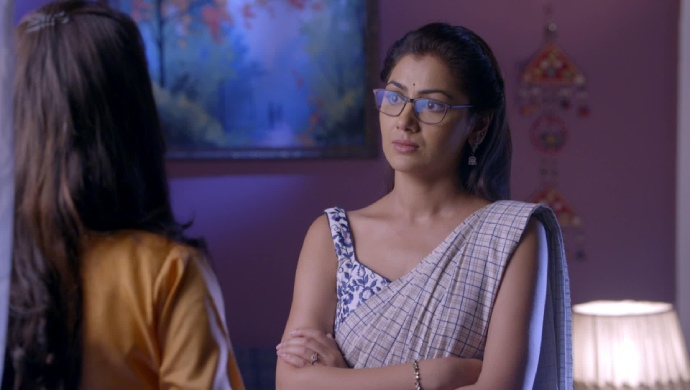 In the previous episode of Kumkum Bhagya, Abhi gets Prachi out of jail. He uses the media and his own social media influence to expose the corrput policeman. Once his work is done he leaves Prachi with Shahana. He almost runs into Pragya, but they don’t notice each other again. Pragya asks the police inspector to apologize for treating Prachi badly.

In tonight’s episode, Aliya goes to Abhi’s room and tells him that it was a bad idea to release Prachi from jail. Abhi tries to avoid the topic. Aliya tells Abhi that he is supporting Prachi the same way he used to support Pragya. Abhi asks her to not bring up Pragya in every discussion.

Aliya accuses Abhi of not seeing the fraud in Pragya and Prachi both. Abhi promises to prove to Aliya that Prachi is innocent. Abhi leaves to tell Rhea that he took Prachi out of jail. Before he even mentions it, Rhea says that she hopes Prachi goes to jail for 4-5 years. After Abhi scolds her for the first time, Rhea calls up Rocky to plan revenge on Prachi.

Meanwhile, Pragya goes back to Chachiji’s house with Prachi and Shahana. There she tells Prachi to come back to Hoshiyarpur. Prachi asks her to not worry. There are bad people in Delhi but a lot of good people too. She goes on to list how many times Abhi has come to help Shahana and her.

Pragya wishes she would meet this man who has been helping Prachi and Shahana every time. She wants to thank him and find out who is this man who changed Prachi’s opinion about fathers. Abhi is at his home remembering Pragya after everything Aliya said to him.

Abhi recollects all the memories and the good times he’s had with Pragya. He takes her picture from his bedside table and holds it as he sleeps. The next morning, Rhea wakes up with a plan to take down Prachi in college. Will Prachi be able to defeat Rhea’s trap? Stay tuned to find out.