Ranbir proposes to Prachi by mistake, while he is actually planning to propose to Rhea. 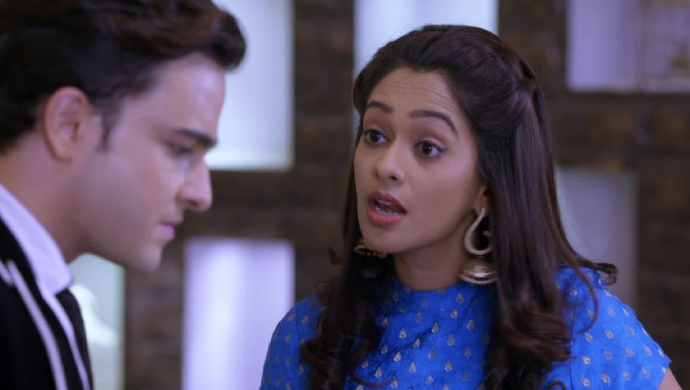 In the previous episode of Kumkum Bhagya, Abhi tries to help Prachi in the kitchen. However, she spills atta all over him. Meanwhile, Prachi and Shahana have a fight with Ranbir and his brother Aryan. Prachi makes Ranbir clean up the mess he made at the party. Abhi gets angry at Prachi’s mom for throwing atta on him. He decides to teach her a lesson.

In tonight’s episode, Abhi is telling Purab how angry he is with Prachi’s mother for throwing atta on him. Purab tries to calm him down when Mira comes in. She tries to stop Abhi from getting so angry. Purab remembers that Abhi has the childish anger that Pragya used to give him. Mira smiles after seeing Abhi in anger and knowing that she cares about him.

Rhea hears everyone at the party praising Prachi and her mother’s catering service. Rhea gets irritated. She steps in and says that the food is made very well because she likes Pragya. She criticizes Prachi and Shahana’s service at the party. Shahana goes to Pragya and tells her about Rhea’s complain at the party. Pragya decides to go and check on the service herself.

Ranbir is planning to propose to Rhea. He gives the waiter a huge tip to tell Rhea to meet him in another room. The waiter messes up and sends Prachi into the room instead. Prachi decides to go after she is done serving the guests. She meets Ranbir’s father who thanks her for teaching his son manners and making him clean his own mess.

Pragya sees Prachi talking to Ranbir’s father. She assumes he is Mr. Mehra and thanks him for all the help he has given her family, especially Prachi. Ranbir’s father is confused but accepts her compliments. Only after Guddan cals him Mr. Mehra, he realizes that the compliments were not meant for him.

Prachi enters the room where the waiter asked her to go. The room is dark and Ranbir proposes to her with his back turned toward her. When Ranbir turns on the lights and sees Prachi, they are both shocked. Ranbir and Prachi fight again. They both reject eaach other and walk away angry.

Pragya goes around making sure that everyone is serving properly. When she doesn’t find any faults she wonders why Rhea was complaining. Stay tuned to know if Pragya confronts Rhea.

Kumkum Bhagya 9 May 2019 Preview: Rhea Hugs Pragya At The Party