In tonight's episode, Aliya confronts Prachi in front of everyone at the party and asks her to prove her innocence. 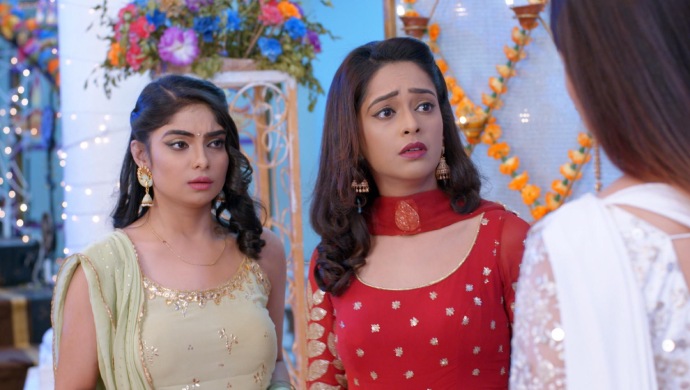 In the previous episode of Kumkum Bhagya, Prachi leaves Sanju in bed and goes to the washroom. She tries to wash her face to remove the effect of the drugs. Downstairs, everyone at the party is shocked seeing Prachi with Sanju. Aliya asks Rhea to go and Prachi downstairs with her boyfriend Sanju. Abhi goes to Disha’s house and tries to help Purab find out if she is with Hritik or not. Priyanka sees Shahana at the Mehra mansion and tells her what Prachi did. Priyanka even tries to blame Shahana for working with Prachi to embarrass everyone.

In tonight’s episode, Purab and Abhi try to play a game with Disha and Hritik to find out the truth. Disha says she doesn’t have a blackboard at home for the game that Abhi wants to play. Abhi tells everyone that they will go to the Mehra Mansion to play the game. He tells Disha and Hritik to come along too.

When they go downstairs, Purab and Abhi plan to get into a fight to make an excuse for not going in the same car. Abhi goes with Hritik while Purab takes Disha in his car. Abhi asks Hritik about him and Disha. Hritik admits that he likes Disha but she doesn’t like him. Purab asks Disha more about Hritik but she avoids answering.

She gets out the car and threatens to call the police when Purab questions her more and calls her a liar. Purab helps her call the cops but Disha cuts the call. She takes a cab and goes away. Purab tries to tell her that like last time she is leaving him again and this time she is lying too.

Pragya is worried about something going wrong. Prachi goes downstairs and Aliya questions her about her boyfriend. She asks Prachi to explain herself. Sanju also walks out and Aliya calls him Prachi’s boyfriend who’s clothes they saw her removing.

Pallavi tries to stop everything, but Prachi claims she is not afraid because she hasn’t done anything wrong. Aliya asks Prachi to prove that she is not at fault then. Will Prachi be able to prove her innocence? Stay tuned to find out.

Karisma Kapoor, Malaika Arora At Their Groovy Best On Movie Masti With Maniesh…

The Chargesheet: Exclusive Stills From The ZEE5 Original Web Series