In tonight's episode, Abhi chases the smugglers when they escape from their house. They return and plan to kidnap Rhea to take revenge. 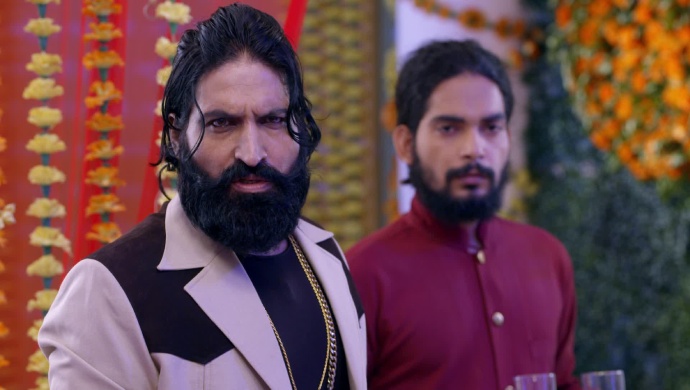 In yesterday’s mahaepisode of Kumkum Bhagya, Abhi gets a Ganpati home and Pragya goes to visit his house to see the idol. Pragya text Mr. Mehra and Abhi asks her to not leave the house without meeting him once. Pragya goes to the kitchen with Sarita. Where they notice two waiters who seem suspicious. The two waiters are actually gold smugglers planning to take the real gold they smuggled in the city by putting it on the Ganpati idol.

Prachi also sees the waiters who she had a fight with the earlier day. She warns Rhea that those men want revenge. Mithali sees Pragya in the house and tells Abhi about it. The smugglers want to drop the chandelier on the Ganpati to break the Ganpati idol and steal the gold from there. Pragya hears Abhi calling her but also sees the chandelier falling on him. She goes up and holds the rope for the chandelier. Abhi also holds the other rope, seeing Pragya.

In tonight’s episode, Aryan catches hold of the criminals with Sarita’s help. The smugglers escape from the house after pushing Sarita and Aryan. one of the guards shows up and holds the chandelier. Abhi runs out to stop the smugglers. Pragya also goes down but decides to help Sarita first by taking her to the hospital.

While running away from Abhi the smuggler runs into his boss. The boss asks him to surrender and promises to release him later. The boss then becomes friends with Abhi who thanks him for stopping the smuggler. When Purab goes to the hospital, he tells Pragya about his son Aryan who helped Sarita.

Rhea scolds Ranbir for rejecting her in front of Prachi. He tells her that this way he can tells Prachi that he rejected Rhea for her. Rhea agrees with Ranbir’s plan. Prachi also tells Shahana that Ranbir rejected Rhea badly. He decides to tell Rhea how bad Ranbir is. Rhea finds out what happened with Prachi’s mom and calls up to check on her.

Abhi reaches home and asks for Pragya. Daadi says Pragya is with Sarita in the hospital. Abhi decides to leave the house to meet Pragy at the hospital. Will Abhi and Pragya meet in the hospital? Stay tuned to find out. Watch the latest episodes of Kumkum Bhagya, now streaming on ZEE5.