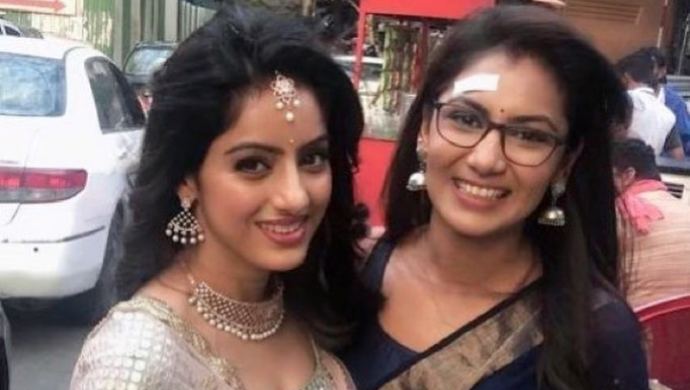 Sriti Jha is one of the most sought-after and massively popular actresses in the Indian television industry. She has claimed to fame at a young age and her body of work has only gotten finer with every passing year. Sriti has been at the receiving end of commercial and critical success, regardless of what role she played on the small screen. Thus, it comes as no surprise that the actress enjoys a legion of fans, spread across continents. Currently seen as Pragya Arora on Zee TV show Kumkum Bhagya, Sriti recently earned a fan in Deepika Singh.

Deepika, who rose to fame with her debut stint in 2011, bumped into Sriti during a shoot. Clad in a pink and silver lehenga choli, the former embodied elegance and Sriti, on the other hand, was seen in the signature Pragya look. Both the actors flashed a wide smile and seemed happy to be found in each other’s company. Sharing the picture on Instagram Deepika captioned, “Met this fabulous lady @itisriti during a shoot recently. In awe of her acting, intellectuality & poetry skills,” she wrote with a red heart emoji.

Met this fabulous lady @itisriti during a shoot recently . In awe of her acting, intellectuality & poetry skills . ❤️

As for Deepika, the actress is making a comeback as the female protagonist after a break. She will share screen space with Sriti’s former co-star Vin Rana aka Purab Khanna of Kumkum Bhagya in her new show. The television series is a supernatural horror drama, bankrolled by Ekta Kapoor, also starring Namik Paul.

Kareena Kapoor Khan Shoots For Dance India Dance 7: How Many Tareefan For Her Opening Act?