The upcoming episodes of Zee TV show Kumkum Bhagya are packed with full-on drama and entertainment. Check out behind-the-scenes action! 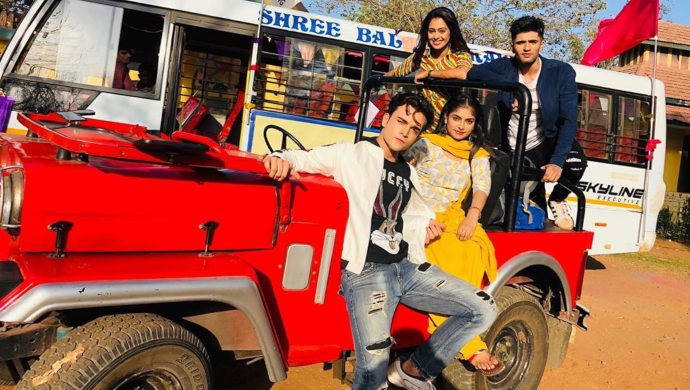 Zee TV show Kumkum Bhagya has kept its fans entertained for five long years! The track of Abhi and Pragya’s love story has gained a widespread fan following and a legion of dedicated followers. The daily soap stars Shabir Ahluwalia as Abhishek Mehra/Abhi and Sriti Jha as his wife and female protagonist Pragya Arora. Recently, the leading serial took a leap of over two decades and introduced Abhi-Pragya’s twin daughters Prachi and Rhea. However, the two sisters don’t know about their real relation and hate each other to the earth’s end. In the upcoming episodes, we shall see Prachi, her cousin Shahana, Rhea and Ranbeer go on a college camping trip.

Aparna Mishra, who plays Shahana in Kumkum Bhagya, shared pictures and videos from the shoot of the forthcoming plot twist. Actress Mugdha Chaphekar essays Prachi and Naina Singh portray Rhea on the show. Check out the behind-the-scenes action here:

The latest episodes saw Abhi and Pragya meeting after staying apart for 20 years. They both had separated after the death of birth of their firstborn Kiara. Abhi took the younger one of the twin Rhea while Pragya left town with Prachi. However, a series of events brings Abhi and Pragya face to face again. But they do not interact much and go their ways again.

Meanwhile, Rhea has been mounting one after the other strategies to create trouble in Prachi’s life. Both of them study in the same college and are always at loggerheads. Will Rhea cause more problems for Prachi at the camping spot? Guess we will have to wait and find out!

Stay tuned and don’t forget to watch Kumkum Bhagya on ZEE5 at 9 pm Monday-Friday! You can also binge-watch previous episodes that you may have missed catching up on!