Abhi is proud of Prachi's help in Kumkum Bhagya's five year celebration with performances from the stars of Manmohini and Yeh Teri Galiyan. 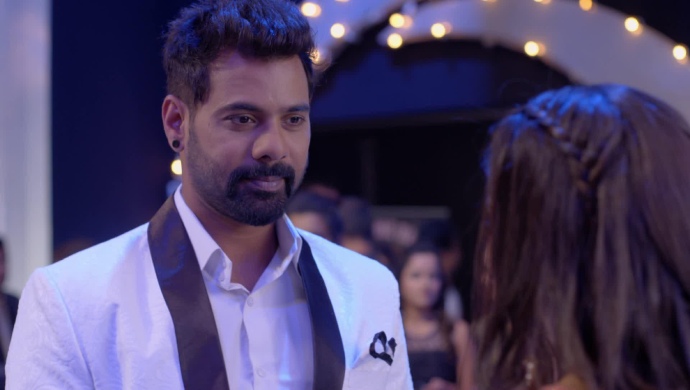 In the previous episode of Kumkum Bhagya, Mira shows up to the resort and decides to take care of Abhi. Pragya leaves the room without seeing Abhi. When they reach home next morning, Prachi prepares for an interview. When she is walking on the way Ranbir drives by in his car splashing dirty water on her fact and clothes. Abhi sees Prachi missed her job interview and offers her a job at his his company. Mira considers making Rhea work with Abhi too so they can bond better.

Ranbir shows up in the morning to meet Prachi. Ranbir goes to Abhi’s house to meet Rhea. Abhi sees Ranbir and informs him that he will be part of the company. Ranbir is happy to be included in Abhi’s family till he finds out he will be working with Prachi. Rhea also gets angry realising that Prachi will be close to Ranbir and Abhi now.

Pragya sees Abhi’s face in the artists performing at the event. She thinks about Abhi and wishes to go to the event and hear him sing. She goes out to give Prachi the file in office. Prachi and Ranbir bump into each other and Prachi’s papers fall from her hand. Ranbir and Prachi get into a fight because Prachi ruined his t-shirt.

Ranbir tells Prachi to clean his shirt. Rhea finds Prachi with Ranbir’s shirt. She accuses Prachi and Ranbir of having an affair at work. Ranbir tells Rhea there’s nothing between him and Prachi because he loves Rhea. However, Rhea refuses to believe him and goes to to speak to Abhi but he is too busy with the event and can’t give Rhea time.

At the event begins with a power-packed performances from the cast of Manmohini. The act features Ankit Siwach and Garima Rathore dancing on ‘Morni Banke’ from Badhaai Ho. This is followed by a performance from Yeh Teri Galiyan‘s Vrushika Mehta’s and Avinash Mishra on ‘Slow Motion‘ from the movie Bharat.

Pragya calls up Prachi to tell her she will bring the folder to the venue itself. Pragya overhears Abhi’s voice on the phone and goes back into his memory. Meanwhile Rhea is jealous when her father talks more to Prachi than her. Will she end up ruining the event? Watch the second half of the celebrations tomorrow to find out.

Watch the episodes of Kumkum Bhagya, streaming on ZEE5. For subscribers with a premium package, the episode is available of ZEE5 before telecast.