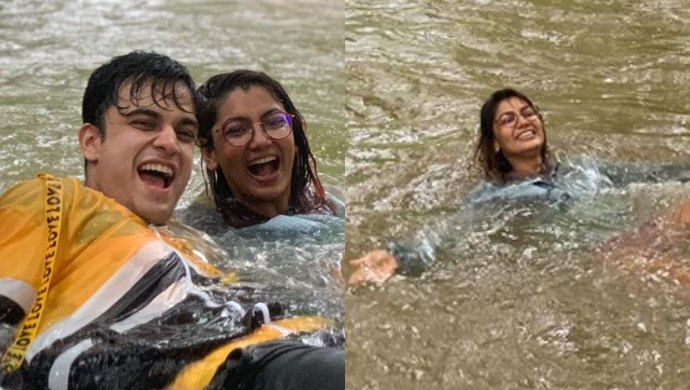 It is no secret that Sriti Jha is a travel junkie. The Kumkum Bhagya actress recently took a trip to Berlin and treated her fans to picturesque views from Germany. As soon as she was back to the bay, Sriti resumed shooting for her Zee TV show in Mumbai. However, while most parts of the city were brought to a standstill due to heavy rainfall on Monday, the starlet enjoyed a fun trip to Sanjay Gandhi National Park. Joining her in the adventure was her Kumkum Bhagya co-star Krishna Kaul, who plays Ranbir on the TV serial. Sriti has been posting some super adorable and cool pictures from their venture and can be seen hanging out together, quite literally.

Drenched in the rain, wearing a blue raincoat, casuals, and shoes, Sriti and Krishna flaunt a wide grin, dipped in the stream as they pose for a photograph. “kaul_me and I decided to let the stream take over,” Sriti captioned one of the pictures, “upside down day,” read another one. Check out photos from Sriti and Krishna’s escapade here:

@kaul_me and I decided to let the stream take over

Krishna is the latest addition of the cast of Kumkum Bhagya along with Mugdha Chaphekar and Naina Singh. The trio was introduced as a part of the Kumkum Bhagya Doosri Peedi in various characters. However, this is not the first time Sriti hung out with her new co-star. Sriti was earlier seen enjoying a lunch date with Mugdha and Aparna Mishra. Even Shabir Ahluwalia enjoyed downtime with his reel children. Going by these pictures of Sriti and Krishna, the actress indeed shares a great rapport with her co-stars off-screen.

Kumkum Bhagya majorly revolved around Pragya aka Sriti and Abhishek ‘Abhi’ Mehra aka Shabir. But after the show took a 20-year leap, the narrative also focuses on the lives of AbhiGya’s twin daughter Prach (Mugdha Chaphekar) and Rhea (Naina Singh). However, these college-going girls are unaware of their actual relationship and don’t get along well with each other. So much so that most of the time we find Rhea plotting against Prachi and both land in trouble often. Notably, Rhea is off late getting close to Pragya, both oblivious to the fact that they are mother-daughter. Meanwhile, Prachi reminds Abhi of his other twin daughter who he hasn’t seen in 20 years after separation from Pragya.

Coming back to Sriti and Krishna’s outing, tell us about an adventure you have tried with your friend in the comments box below.