As Kumkum Bhagya turns 6 this April, we've built an ultimate catch-up guide from Day 1 to Quarantine. Binge-watch all episodes, streaming free on ZEE5 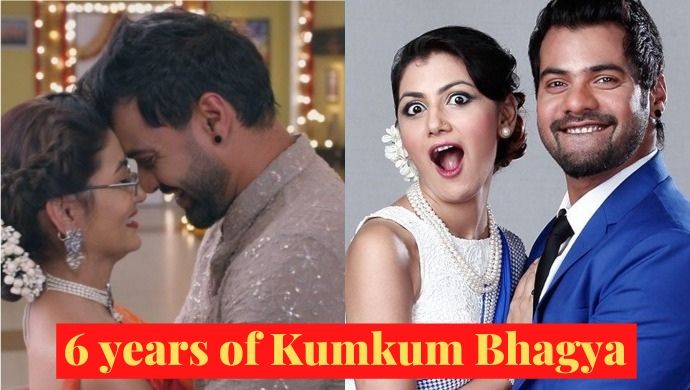 Kumkum Bhagya celebrates six years this April! With over 1500 episodes released since its genesis, the show has managed to garner a lot of attention and love. What began as a loosely adapted tale of Jane Austen’s Sense and Sensibility has turned into entertainment for several genres from romance to thriller to crime to drama. The show premiered on April 15, 2014, on Zee TV and has consistently been in the top 10 TRP chart.

We relive the 6 years of Kumkum Bhagya and some of the important information that fans who joined in later should know about. Right from the love triangle between Pragya, Abhi, and Tanu to the birth and death of Kiara, Pragya and Abhi’s firstborn child, the show has seen a lot in the past six years. Here are some highlights of all six years and things that you might have missed.

#How it all began

Pragya and Bulbul help their mother run a marriage hall called Kumkum Bhagya. Abhi, the rockstar, is dating supermodel Tanu while his best friend and music handler Purab, is engaged to Abhi’s sister Aaliya. Purab hires Bulbul in order to make the work run smoother, but falls in love with her.

#Aaliya and Purab’s relationship and the love triangle

Despite being engaged to Abhi’s sister Aaliya, Purab cannot help it but fall for Bulbul. Aaliya assumes that Purab likes Pragya and tries to get her out of the way. However, on the day of his wedding with Aaliya, he leaves her at the altar and announces that he loves Bulbul and cannot live without her.

To save Aaliya and Purab’s relationship, Abhi decides to marry Pragya and get her out of the way. However, he doesn’t know that Purab actually likes Bulbul. Initially, Abhi is upset with Purab for leaving Aaliya, but eventually, they reconcile and he gets them married. The marriage also brings Pragya and Abhi closer.

#Tanu announces that she is pregnant with Abhi’s child

Out of the blue, Tanu makes an announcement that she is expecting a child with Abhi. This is during the time when he is married to Pragya. The truth here is that Tanu’s child is actually the result of a one-night stand with Nikhil. She fakes a DNA report to prove that the child is Abhi’s.

Pragya learns that Tanu is faking the whole pregnancy bit with Abhi as the father. However, before she is able to tell Abhi everything, Tanu and Aaliya get to her and stage an accident. She is declared dead!

#Pragya returns from the dead

In the same year, after a brief leap, Pragya returns and manages to take away all of Abhi’s properties from him.

In order to save Pragya and Abhi, Bulbul succumbs to a face injury and is at the hospital. After the trauma of what has happened to her face, Bulbul is heartbroken and has no wish to live anymore. Aaliya’s words affect her so much that she is in pieces. She thinks that Purab would never love the new her. She decides to commit suicide and informs Pragya and Purab about the same. In fact, she jumps off the cliff in front of Purab and Pragya. This leads to Sarla cutting all ties with her.

#Pragya goes on a revenge spree against Aaliya and Tanu

In order to avenge the wrongdoings done by the Mehra family, Pragya decides to avenge everything, especially the death of her sister Bulbul. Of course, she wants the truth of Tanu and Aaliya to come out before Abhi.

In Pragya’s vindictive streak, aside from putting Aaliya behind the bars by faking some property papers, she then turns her attention towards Tanu. She follows Tanu, who meets her boyfriend Nikhil and reveals that the baby is not Abhi’s but his. Her plan is revealed and Pragya uses this to bring the truth to Abhi’s notice.

A tumultuous accident leads to Abhi losing his memory. Pragya is the first one to meet Abhi after he regains consciousness. However, he fails to recognise her and asks for his family instead. His amnesia results in Tanu winning against Pragya.

While Abhi and Pragya’s drama continues, Purab finds companionship in Disha. In order to move on from the pain caused by Bulbul’s death, Purab decides to move on when Disha proposes to him. He realises that he should give his marriage with her a try. Things start looking good for these two.

#Abhi regains his memory; Pragya slips into a coma

Abhi does regain his memory on the day of his marriage with Tanu. He immediately rushes to find Pragya. However, she is shot by goons and slips into a coma. Eventually, her look-alike Munni returns and strikes a bond with Abhi.

Abhi meets with a new nemesis, Simonika, who enters his life with a view to kill him to seek revenge for the death of her dead husband Dushyant. She joins forces with Tanu and Aaliya for this. They convince her to attack Pragya instead. In all this mess, Dadi ends up dying, which results in a misunderstanding between Pragya and Abhi, resulting in him asking her to leave the house.

Simonika and Tanu plan to attack Pragya. However, a series of confusions and unfortunate events lead to them killing Dadi in the process. While their original plan is to murder Pragya, she tries to go and save Dadi’s life. Dadi’s death leads to another misunderstanding between Abhi and Pragya. He asks her to leave the house and calls off their relationship.

After realising that there is no future for her as she cannot live with Abhi, Pragya decides to commit suicide. She is aware of her pregnancy but doesn’t inform Abhi about the same. Instead, Pragya jumps off a cliff.

The show takes another leap at this point. Pragya finds someone who saves her and her daughter Kiara.

A 7-year long leap takes place which results in the entry of Pragya’s good friend King Singh. He helps Pragya raise her daughter Kiara and gives her his name to make sure that she doesn’t feel fatherless. They are based out of the UK and return to India to crack a music deal.

Pragya and Abhi’s paths cross once again and this time, he meets Kiara as well. However, since he doesn’t know that she is his daughter, he doesn’t act upon it. Later, Disha and Purab bring the truth out and help him prove to Pragya that Kiara is their daughter and that the three of them belong together.

In the course of events, Abhi does find out that Kiara is his daughter and they manage to reunite. But their joy is short-lived as Nikhil re-enters Tanu’s life and swears to avenge the loss he incurred from Abhi. He kidnaps Kiara. King, Pragya, and Abhi each try to save her while Pragya is eight months pregnant. Sadly, just as they are about to save Kiara, Nikhil jumps in the water with her, killing both of them in the process.

Kiara’s death leads to a big fight between Pragya and Abhi and eventually results in them parting ways. Since Pragya gives birth to twin girls by the time Kiara is dead, the two fight over custody of the twins. While Abhi decides to keep one baby, Pragya keeps the other one and walks out of his life.

A 20-year long leap takes place and both, Abhi and Pragya take up new roles as parents to college-going girls, Prachi and Rhea. Pragya and Prachi shift from Hoshiarpur to Delhi so the latter can pursue further studies, for which she has received a scholarship. Rhea, on the other hand, is raised by Abhi and schooled by Meera and Aaliya.

Prachi and Rhea start off on a bad note as they both don’t like each others attitude and approach in life. Things get dire when Prachi slaps Rhea for humiliating another student along with her. From here onwards, a new chapter of a hateful relationship that the sisters share begins. Currently, they both are in love with the same guy, but he only has his eyes set on Prachi.

Important characters on the show –

Important characters of the past –

Abhi and Pragya – protagonists of the show
Purab and Disha – married and divorced
Purab and Aaliya – currently married with a teen son, Aryan
Rhea and Prachi – Abhi and Pragya’s twin daughters separated at birth
The Kohli family with Ranbir, Vikram and Pallavi – Abhi’s business partner and family friends
King Singh and Pragya – Pragya’s boss who later falls in love with her
Abhi and Tanu – initial lovers who later married after Pragya died and once again after she left Abhi
Bulbul and Pragya – the Arora sisters who started working with Abhi and Purab
Bulbul and Purab – Purab’s love interest before Disha, she was also his first wife who killed herself

The current track of Kumkum Bhagya explores the new-age love story surrounding Prachi, Ranbir, and Rhea. It is a love triangle and the two girls are interested in Ranbir, however, he only has his eyes set on Prachi. Sadly, Ranbir’s wedding has been arranged with Maya, who has an intimidating father. This is a new conundrum in his love life. How will the two girls save Ranbir? Who will he choose between Prachi and Rhea? Stay tuned to the show for updates!

Why Do All Men Cheat? Here’s How The Latest ZEE5 Original Shukranu Tackles…

Vicky Kaushal To Ranveer Singh: 7 Actors Who Went To Extreme Lengths For Movie…