Kumkum Bhagya Vs Kundali Bhagya: Which Romantic Saga Has Touched Your Hearts?

Karan-Preeta's forlorn tale of love or Abhi-Pragya's heartbreaking journey? Vote for your favorite couple inside! 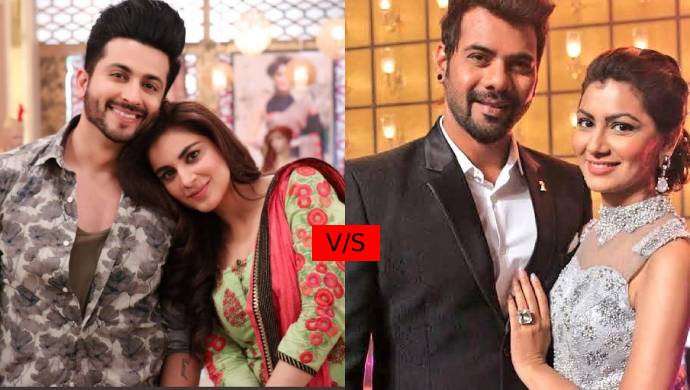 Zee Tv is known to deliver the best be it in the form of horror, thriller, or romance! Sriti Jha and Shabbir Ahluwalia’s Kumkum Bhagya is still one of the most-viewed shows even after a long run of six years! The show focuses on the romantic journey of a rockstar Abhishek Mehra and his wife Pragya. Their life is full of ups and downs, and through all the struggle over the years of separation, Abhi and Pragya’s true love still flickers in their hearts. Kumkum Bhagya’s spin-off tale Kundali Bhagya is one of the other most-viewed and loved Zee Tv shows! Shraddha Arya and Dheeraj Dhoopar play the roles of Dr. Preeta Arora and Karan Luthra in the show. The bittersweet relationship shared by Karan and Preeta reminds us of Pragya and Abhi’s initial days!

Preeta is Pragya’s sister and although the shows are completely different and do not share a track, the stories resemble each other, especially on the romance front! Preeta met Karan and his brother Rishabh when she was hired as the physiotherapist by their family to tend to their grandmother’s ailments. Preeta shared a friendly bond with Rishabh but she got off on a sour note with the younger brother Karan. Similarly, Pragya met Abhishek Mehra in a very misunderstood fall of events. Pragya’s sister Bulbul was hired at the advertising agency of Purab (Abhi’s best friend) and unexpectantly Purab fell in love with Bulbul even when he was betrothed to Aliya.

Rishabh fell for Preeta and misunderstandings arose when Preeta revealed that Sherlyn (Rishab’s to-be-wife) was having an affair! Karan swore to destroy Preeta’s life but decided to find evidence against Sherlyn first. They figured out the truth but it was too late as Rishabh married Sherlyn and Karan’s anger rose along with the vengeance against Preeta. On the other hand, Abhi misunderstood and thought Purab had fallen for Bulbul’s elder sister Pragya! To make her repent, he married Pragya and though that he had helped clear the way for his sister Aliya. Abhi quickly realised his fault but there was no way to retrace. He fell for Pragya and her beautiful persona.

In the years to come, Pragya and Abhi battled for themselves and their relationship. But the constant arguments, events like the loss of their daughter, separated them and they decided that each one of them would take the custody of one daughter out of their new-born twin daughters. Meanwhile, Karan married Preeta and their love-hate relationship still continues as he is now on the verge of marrying Mahira. Are Karan and Preeta headed for the same downfall? We will have to wait and watch!

But before that, Vote for the most romantic and heartbreaking tale out of these two here.

Which love story is the best put of these two?
Don't Miss

Watch Parmanu The Story Of Pokhran On ZEE5

Get Ready For #AtrangiMonsoonBinge This June, With A Unique Line-Up Across Genres On ZEE5

Guddu Episode 25-26 Review: Billori's Trick Will Make Guddu Fly, Can He Save Himself Now?