Preeta save Rishabh from being poisoned. Sherlyn blames Preeta for poisoning Rishabh's drink. 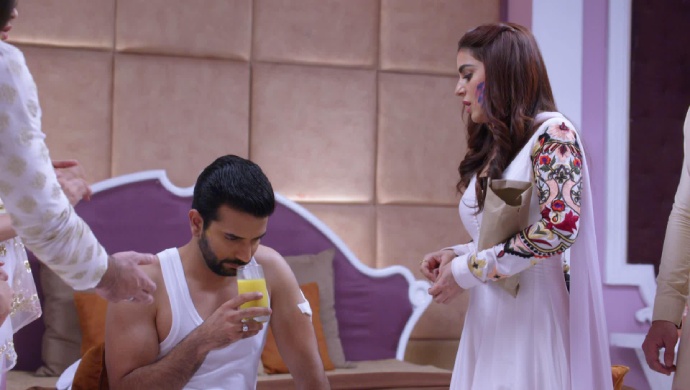 In last week’s episode of Kundali Bhagya, Preeta is helping Rishabh recover from his wounds by giving him an injection. Prithvi asks Sherlyn to be near Rishabh instead of Preeta. Meanwhile, Preeta asks the house-chef, Girish, to make a glass of Haldi Milk for Rishabh, which Monisha puts poison into.

In tonight’s episode, Prithvi corners Sherlyn and tells her to stop attacking Preeta’s character every chance she gets. Sherlyn tells Prithvi that she gets jealous that Prithvi loves Preeta and not her. That is why everything she does against Preeta is because of Prithvi.

Monisha is caught by Rakhi when she walks by the kitchen. However, she doesn’t trust her eyes because of the bhaang she had earlier. Rakhi is taken away by her husband back to her room. Girish catches Monisha in the kitchen and asks her to leave because he assumes she’s there to steal things.

Monisha gets away from the kitchen without anyone realizing that she poisoned the milk. Preeta goes back to help replace Rishabh’s wound dressing. While she’s there Sherlyn enters the room too and begins complaining about Preeta knowing too much about everyone in the house.

Prithvi steps in too and asks Sherlyn to be nice to Preeta. He tries to gain favour with Preeta by standing up to Sherlyn. Sherlyn demands Rishabh to stand up for her. Eventually, Rishabh yells at Prithvi, asking him to speak properly to his future wife, Sherlyn.

Meanwhile, Shrishti goes with Sameer and Tanvi to buy the medicines. While Tanvi and Sameer are discussing the childhood memories Shrishti feels left out. She tricks Tanvi to sit in the backseat on the return journey so that she sits next to Sameer.

When they return to give Rishabh the medicines, Girish also walks in with the glass of milk that doesn’t know is poisoned. Rishabh dislikes milk and tries to avoid drinking it during which he ends up spilling some milk around. Some of the milk falls on litmus paper in Preeta’s first aid box.

Noticing the litmus papers turn red, Preeta is sure that the milk is poisoned. She knocks the rest of the milk from Rishabh’s hands too. Will they be able to catch Monisha after her second failed attempt at killing Rishabh? Stay tuned to find out.

Kundali Bhagya 2 April 2019 Preview: Preeta Gets Closer To Finding Out About Monisha