In tonight's episode, Preeta admits to Srishti that she and Karan are made for each other. She decides to confront Mahira to stop the wedding. 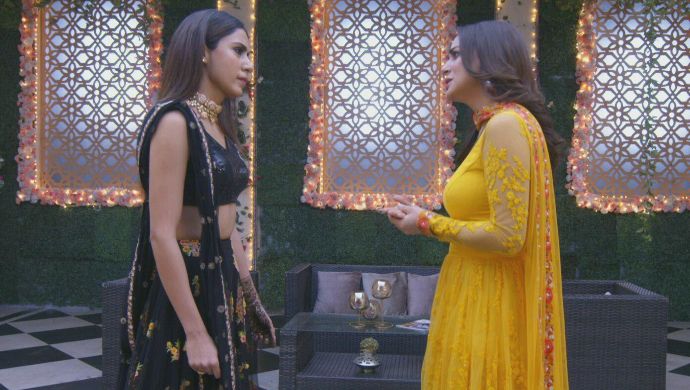 In the previous episode of Kundali Bhagya, Karan’s mehendi falls on Preeta’s hand. Srishti asks Preeta if everything happening at the Kumkum Bhagya hall is not affecting her. Preeta tells Srishti that if Karan’s mehendi gets applied on her hands then she will take it as a sign to be with him. Eventually, Preeta admits that she and Karan are in each other’s Kundali Bhagya. Preeta asserts that she and Karan are made for each other. She decides to speak to Mahira aboutthe same. Sarla, on the other hand, is upset to hear about the incidents that take place and gets angry thinking why God is torturing Preeta.

In tonight’s episode, Preeta accepts in front of Srishti that she is meant to be with Karan and that he is the one made for him. Preeta agrees to stop Karan and Mahira’s wedding. She decides to confront Mahira. On the other hand, Rishabh and Kritika try to make Karan understand that he should not go ahead with the wedding. Rishabh tells Karan that his mehendi fell on Preeta’s hands for a reason and that he should reconsider his decision.

Sherlyn walks up to Srishti and asks her where Preeta is hiding. Srishti retaliates and blackmails Sherlyn to shut up or else she will tell everyone the truth about her pregnancy. Srishti further threatens Sherlyn that if she tries to do anything to Preeta and her family, she will let the whole world know that she is not carrying Rishabh’s baby but somebody else’s. Later, Srishti asks Mahira to go to the terrace to meet Preeta.

Meanwhile, Prithvi comes to Kumkum Bhagya hall. Rishabh asks him what is he doing at Karan and Mahira’s mehendi function. Prithvi tells him he came looking for Preeta.

Karan looks for Preeta and gets irritated with her for being away from him. Karan asks Preeta to stay close to him. An upset Preeta tells Karan that they both shouldn’t be near each other. He tells her that he needs her and wants her around to take care of his needs. Preeta is in a dilemma as to how she should tell Karan why she cannot be near him.

Plot Twists 2019: 10 Most Shocking Moments From Shows Like Kumkum Bhagya,…

From Road Tripping To Foreign Trips, Here's How Your Favourite Stars Brought In 2020