In tonight's episode of Kundali Bhagya, Srishti and Sammy bring chloroform to knock Mahira unconscious and stop the engagement. 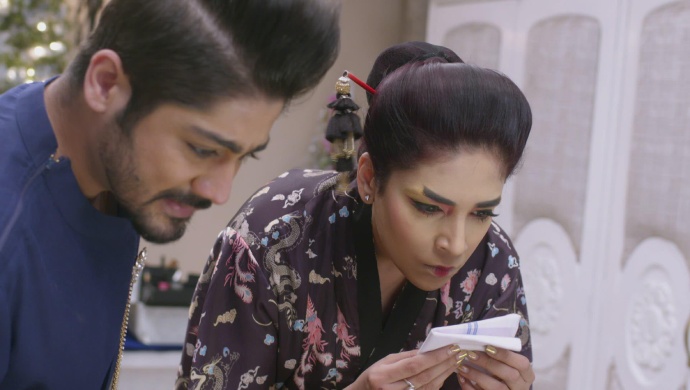 In the previous episode of Kundali Bhagya, Preeta goes the Luthra house to look for Srishti by disguising herself as a waiter. However, she sees Karan walking towards her and panics. Srishti ruins Mahira’s hair and make-up and waits for Mahira who is in the bathroom cleaning up. When Karan reaches Preeta, she gets nervous and spills juice on him. Prithvi goes to Preeta’s house where he finds out Preeta and Srishti are both missing. Preeta as the waiter apologises to Karan for spilling juice on him. Karan argues with the waiter but feels happy without realising he is talking to Preeta.

In tonight’s episode, Rakhi asks Karan if he is happy with the engagement. Karan says he is happy but doesn’t know why. He takes the waiter Preetam to his room to clean the jacket. Srishti goes to Sammy and tells him that she has locked Mahira in the bathroom. She asks Sammy’s help in ensuring that Mahira doesn’t reach the engagement.

Srishti forces Sammy to follow her plan of buying chloroform and making Mahira unconscious. Srishti decides to use Preeta’s recommendation as a doctor to get chloroform. Prithvi is driving away from Preeta’s house and feels that Preeta is happy being Karan’s wife. He decides to Preeta stops Karan’s engagement then he will have to kill Karan to get him out of Preeta’s life.

Preeta cries because the Luthra’s don’t miss her at all. She tells Karan something went in her eye. Karan sees her eyes and feels it is Preeta. He then holds her hands and feels like they are Preeta’s hands too. Preeta jokes saying she washes her hands in milk and honey. Karan takes off his jacket for Preeta to clean but she feels shy. Will Karan realise he is talking to Preeta? Stay tuned to find out.

Tujhse Hai Raabta 11 December 2019 Preview: Malhar Does The Extreme To Save His Country