In tonight's episode, Rakhi scolds Sherlyn for instigating everyone against Preeta. Sherlyn decides to make Rakhi slip and fall down the stairs 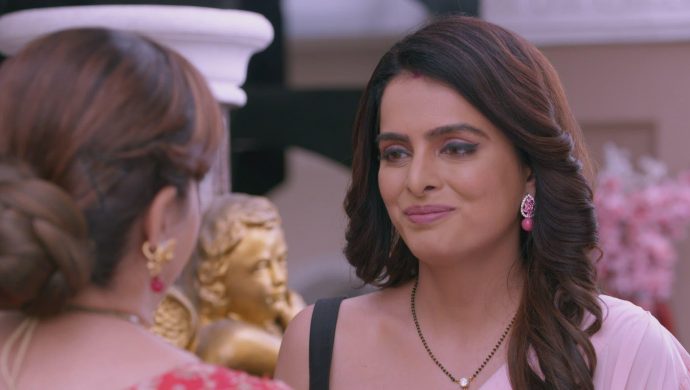 In the previous episode of Kundali Bhagya, the police arrest all the robbers. They find Prithvi hiding and try to arrest him too. Sarla notices this and tells them that Prithvi is like her family. No one else notices Prithvi as Karan and Preeta argue about who called the police first. Rishabh thanks Preeta for saving his family. Sarla tells him that Preeta did everything to save Kumkum Bhagya hall and not for his family. Rakhi goes home and wishes that Preeta was her bahu. Mahira hears Rakhi saying the same and gets upset. Karan and Preeta look at the mehndi on their hands and feel like they are meant to be together.

Rakhi is serving everyone at the dinner table. She asks Daadi to have extra almonds because Preeta said it was good for her health. Sherlyn tries to create an issue because Rakhi spoke about Preeta. Karan and Rishabh join Rakhi in defending Preeta. Ramona says Preeta and her family might have hired the robbers to attack the Luthras.

Karan tells Ramona that he knows Preeta’s family and they would never do that. He asks everyone to be grateful to Preeta for saving their lives. Rakhi scolds Sherlyn for instigating people against Preeta every time. Sherlyn goes to her room crying and calls up Prithvi. She tells him how Rakhi spoke rudely to her because of Preeta. Prithvi promises to help Sherlyn get revenge on Rakhi.

Rakhi goes to Karan’s room with Rishabh. She tells them to not speak rudely to Sherlyn even if they are right. Karan refuses to follow her advice. Sherlyn sees Rakhi and takes the bottle of oil in her hand. She spills on the stairs to make Rakhi slip down and hurt herself. She hopes Rakhi joins Mahesh and goes into a coma too.

Mahira sees Sherlyn spilling oil on the stairs and then meeting Rakhi. Karan and Rishabh talk to Rakhi before she goes downstairs. Daadi is walking while talking on her phone and doesn’t notice the oil. Mahira watches in shock as Daadi slips on the oil and falls. Will she survive this accident? Stay tuned to find out.