In tonight's episode, Srishti sneaks into the Luthra house to find the legal notice. After Sammy refuses to help her, Kareena catches her. 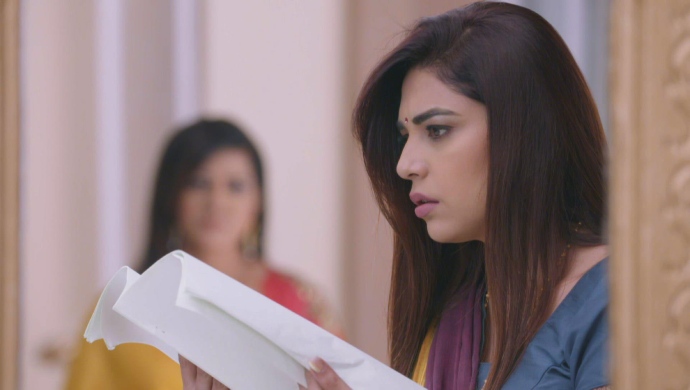 In the previous episode of Kundali Bhagya, Kareena reads the legal notice and sees that Preeta has asked for half of Karan’s match-winnings and half of his shares in the entire Luthra property. Preeta finds out that Karan has been telling everyone he is her husband’s friend. This upsets her and she goes home yelling at Srishti. Sammy calls Srishti asking her why Preeta sent a legal notice. Kareena takes Sammy’s phone away and asks him to stop talking to Srishti from now on.

In tonight’s episode, Kareena tells Sammy that talking to Srishti will give Preeta all the plans of the Luthra’s. She says if he doesn’t want Karan in jail, he shouldn’t talk to Srishti. Kareena asks everyone to not talk to the Arora’s from now on. She says they will reply to Preeta’s notice by saying she was having affairs with other people.

Everyone in the family is opposed to the plan. They tell the lawyer to make a less offensive notice. Kareena gets irritated and leaves. Srishti tries to find out what notice Preeta sent the Luthra’s. Preeta is in a bad mood and Srishti doesn’t feel it would be good to speak to her. She dressed up in a laudry woman’s attire to enter the Luthra house.

She poses as the launderers’ daughter and asks for clothes to wash. Kareena gets suspicious when Srishti refuses to lift her ghungat. Srishti tries to find Sammy to know the truth. She bumps into Mahira on the way who also becomes suspicious. Srishti overhears Kareena saying the notice prepared by the lawyer is too weak.

Kareena tells them to teach Preeta a lesson she will never forget. Srishti gets Sammy’s attention and asks him to meet her in another room. Sammy tells Srishti he cannot help her because he has already promised Kareena to not talk to her. Kareena notices the laundry woman in the house still and becomes suspicious.

She follows Srishti to her room and finds her looking for the notice and promises to take her in front of everone. Rishabh tries to call Preeta but Sherlyn stops him . Rishabh believes Rakhi’s suggestions of politely asking Preeta to take back the legal notice was good. Will Kareena change their opinion? Stay tuned to find out.

Jamai 2.0 Fans, The Wait Is Over! Ravi Dubey-Nia Sharma’s Video…

International Men’s Day 2019: 7 Things Every Man Is Tired Of Hearing