In tonight's episode, Preeta doubts that Prithvi is too close to Sherlyn. She confronts the bridegroom about it but Karan refuses to respond. 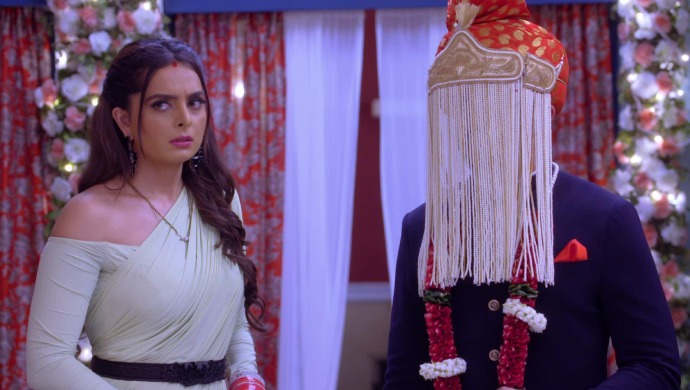 In the previous episode of Kundali Bhagya, the police show up to arrest Preeta. Sherlyn accuses Preeta of stealing an expensive necklace from the Luthra house. Sarla begs the police to not arrest her daughter from the mandap. The police decide to search Preeta’s house and if they find the necklace there, then they have to arrest Preeta. Karan also goes to Preeta’s house. He tells Sammy that they need to stop Sherlyn’s plan at the wedding. Karan tells Preeta

In tonight’s episode, Preeta finds out that Sherlyn had given him 25 missed calls. Srishti also tells Sherlyn that Preeta needs to speak to Prithvi about his relationship with Sherlyn. Prithvi’s mom tries to talk to Sherlyn and save Preeta from getting arrested.

Preeta and Prithvi’s family decide to ignore Sherlyn. Seeing this Sherlyn goes to meet Prithvi who is actually Karan. She asks him why he is cheating and getting married to Preeta. Karan thinks Sherlyn knows his plan and goes back into his room. Preeta sees Sherlyn with her bridegroom and becomes suspicious.

She goes to the room to meet Prithvi. She asks him why he didn’t support her against Sherlyn. She even asks him if something is going to on between him and Sherlyn. When Karan doesn’t respond Preeta assumes that he is having a relationship with Sherlyn. She decides to call off the wedding.

Biji enters and supports Preeta’s decision. However, she notices Karan’s face behind the sehra. She gets excited and convinces Preeta to not call off the wedding. She says Sherlyn may like Prithvi, but Prithvi only loves her. Preeta decides to go ahead with the wedding. Will Sherlyn break Karan and Preeta’s wedding? Stay tuned to find out.