In tonight's episode, Kareena exposes Preeta and Srishti's disguise. Preeta admits that she was trying to stop Karan-Mahira's engagement. 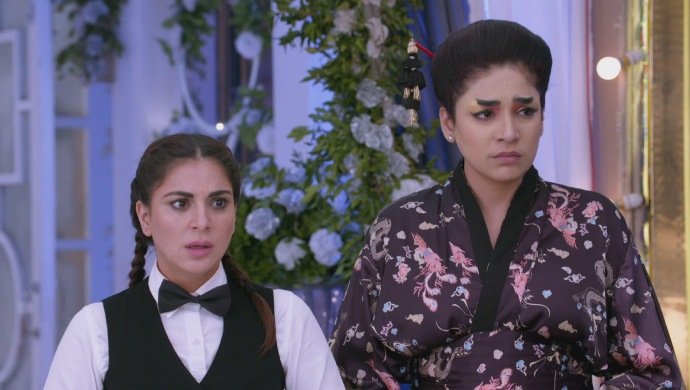 In the previous episode of Kundali Bhagya, Preeta finds Srishti and begins beating her up for kidnapping Mahira and trying to stop the wedding. Preeta decides to free Mahira first before leaving the Luthra house. Kareena and Mahira’s mother continue to look for Preeta and Srishti. Rishabh asks Karan is he wishes Preeta comes to the house and stop the engagement herself. Mahira finds Preeta and Srishti and assumes she was part of the plan too. Mahira even assumes that Preeta and Srishti’s mother, Sarla is involved in this plan.

In tonight’s episode, Preeta ties up Mahira’s mouth for talking ill about her mother. She then leaves the room with Srishti. Rakhi sees daadi that she doesn’t think Preeta and Srishti would do something so wrong. Kareena and Ramona both are worried that something happened to Mahira. They ask Rakhi to stop putting so much faith in Preeta.

Mahira manages to free herself from the ropes and tries to wake up Sammy. When he doesn’t wake up, she goes to her room to prepare for the engagement before the mahurat ends. Sammy wakes up and finds Srishti leaving with Preeta. He asks them to go away as soon as possible, but Kareena stops them. She removes Preeta’s moustache and reveals the truth to everyone.

While Kareena and Daadi continue to insult Preeta, even Karan joins in. Ramona is worried what happened to Mahira. Rishabh and Rakhi say Preeta will not do anything to Mahira. However, Mahira enters the room saying Preeta and Srishti kidnapped her. When Mahira blames Preeta, Srishti takes the blame on herself. Rakhi says she is ashamed of Preeta and Srishti.

Prithvi is at his home tired of waiting for Preeta. He realises she is gone to stop the engagement and decides to kill Karan if the engagement is stopped. Kareena decides to call the police, and arrest Srishti. Preeta steps in saying she was behind everything because she didn’t want the engagement to happen. How will Karan react to this statement by Preeta? Stay tuned to find out.

Kundali Bhagya 16 December 2019 Preview: Karan Decides To Get Engaged In Front Of Preeta