In tonight's episode, Karan first praises Preeta and then follows her around the house. He ends up tearing her dupatta, just like the old times. 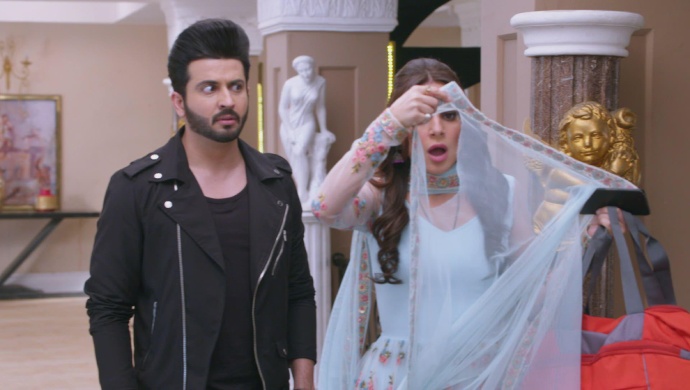 In the previous episode of Kundali Bhagya, Preeta promises her mother to return from the Luthra house  once her work is done. Sherlyn tells Mahira that she needs to kill Preeta, to get her out of the Luthra family. When Preeta is late, Karan decides to get her himself. He bumps into Preeta and stops her from falling. Mahira sees Preeta in Karan’s arms and gets jealous. Srishti and Sammy are out on a date and they find Sarla and Janki walking past them. Janki sees them together, but doesn’t tell Sarla anything. Preeta is on her way to the Luthra store room and she calls up Srishti, to tell her that she is at the Luthra house.

In tonight’s episode, Karan follows Preeta to the store room to ask her if Daadi is really okay or she’s lying. Preeta tells Karan that she never lies and assures him that Daadi will be alright soon. Preeta hands over the candle to Karan and picks up the medicine box. Preeta tries to leave but Karan stops her by thanking her. He asks Preeta why she comes running to his house, whenever he calls her.

Preeta says she is at his house to treat Daadi and not to meet him. He asks Preeta why she is such a nice person. Karan thinks Preeta is here for him. Preeta refuses to admit her feelings for Karan and runs out of the room. Daadi tells everyone that she thinks Preeta is a gem and they have treated her badly for too long.

Preeta is walking back to her room when Karan runs after her. He steps on her dupatta by mistake and it tears. Preeta is reminded of the uncountable times Karan tore her dupatta. When Preeta meets Daadi, the latter apologises to Preeta for how badly they treated her. Seeing this, Karan gets emotional. Rishabh takes him out and hugs him. Rishabh says even Karan now knows that Preeta was never in the wrong.

Mahira cries and tells Kareena that Preeta is going to steal Karan from her. Kareena promises that nothing of that sort will happen. Preeta is about to go back home when Karan offers to drop her home. He does so and before saying goodbye, gives her five dupattas that he had brought for her before Rishabh’s wedding.

Kundali Bhagya Becomes The No #1 TV Show: 4 Major Moments From The Recent…