Why does Karan lose his cool on Prithvi? Find out! 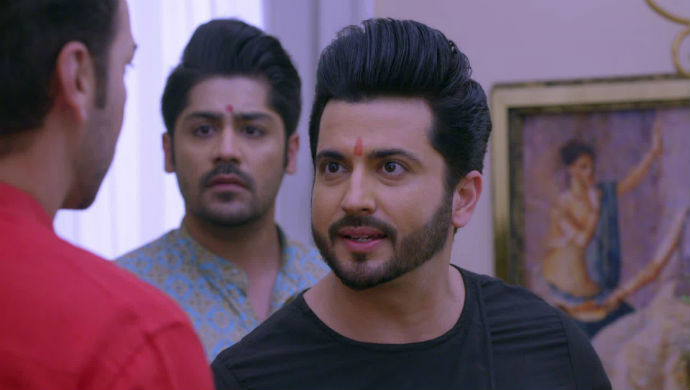 In the last episode of Kundali Bhagya, we saw Rishabh acting random, after drinking bhaang. Prithvi convinces him to go to his room and wait for Preeta. Rishabh obliges. Meanwhile, Karan and Preeta get ready to feed the glass of thadai with bhaang mixed in it, to Sherlyn. Karan manages to and Preeta follows Sherlyn to keep an eye on her. Sherlyn feels giddy and Prithvi finds her. He forces her to go into Rishabh’s room. The episode ends with her and Rishabh accidentally falling asleep on the same bed.

In tonight’s episode, we saw Preeta looking for Sherlyn and gets worried when she isn’t able to find her. She asks Srishti to look for her. Prithvi finds Preeta looking for Sherlyn and stops her. He distracts her by saying that she is looking beautiful. He starts acting inappropriate and leans in to kiss her, when Preeta slaps him. She asks him to behave himself and not act this way. Preeta adds that she finds this behaviour unacceptable, especially since they are not married yet. Prithvi quickly covers up by saying that someone mixed bhaang in his drink, which is making him act this way.

Later Karan meets Preeta and asks her why she’s upset but she is unable to tell him. He however insists that she tell him what’s wrong. But she brushes aside the topic.

Meanwhile, Prithvi finds Sherlyn and Rishabh asleep on the bed and panics, thinking that no one would believe that they got intimate. He switches their positions, by putting Rishabh’s arm around Sherlyn, to make it look like they were in a compromising position.

He then plans to start a fire in order to make everyone father around Rishabh’s room, so that they can spot him with Sherlyn. He uses an electric wire to light a spark and raises an alarm, saying that there;s a fire. He lands up at the spot and sees that Karan, Preeta and the rest are trying to the fire out. He notices that the elders are missing and says he will use this opportunity to gather everyone around Rishabh’s room.  He tries to escape but Karan catches him leaving and asks where he is going. Karan tells him off for creating a big scene for such a small fire and the episode ends with him calling Prithvi a wuss.

How will Prithvi react? And will Karan and Preeta find Rishabh and Sherlyn, as planned by Prithvi? Stay tuned for all the updates!

If You Are A Sunny Leone Fan, Don't Miss Her Inspiring Story In ZEE5's Original Series Karenjit Kaur

Kundali Bhagya 15 March 2019 Preview: Preeta To Catch Rishabh And Sherlyn In Bed Together!