Preeta collects Sherlyn's blood test results which prove she has been pregnant for the last 3 months. 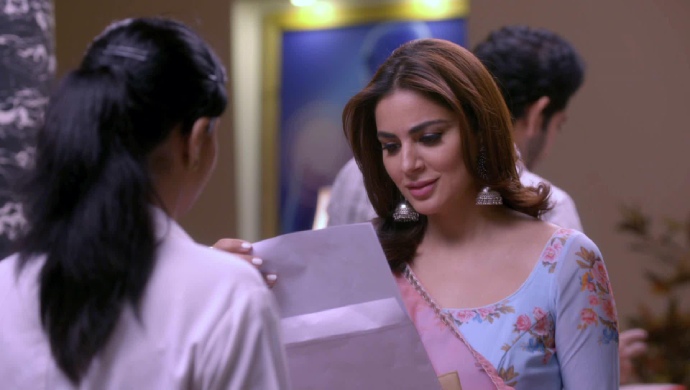 In the previous episode of Kumkum Bhagya, Rishabh and Preeta are paired up to dance at the bachelor party. Sherlyn gets jealous and asks to dance with Rishabh. She asks Preeta to dance with Prithvi instead. However, while dancing Sherlyn faints due to her pregnancy. Preeta pretends to take care of Sherlyn but instead takes a sample of blood from her. She takes it to a lab to test if Sherlyn is pregnant or not. Meanwhile, the wedding preparations are on in full swing at the Luthra house.

Meanwhile, Sirshti is leaving from her house to reach the wedding. Daadi and Biji refuse to go for the wedding because they dislike Sherlyn. They are also upset that Sarla left for her friend’s daughter’s wedding without telling them about it. Srishti agrees that it is not something her mother would do but she decides to ignore it.

Meanwhile, Sherlyn comes to meet Sarla who is tied to a chair and kept guarded by few people at all times. Sherlyn taunts Sarla. She says that Preeta and Srishti both don’t suspect anything and they won’t come to rescue her. She also tells Sarla that now nobody can stop her wedding to Rishabh. Sarla tries to breakfree but is unable to.

Back at home, Sherlyn is ready as a bride and Prithvi comes to meet her. He tells her that no one can stop them now. Sherlyn’s mom comes in and asks Prithvi to stay away from her daughter. Prithvi tells her that he needs to be near her so nothing stops her from marrying Rishabh.

Preeta calls up Karan and tells him the test results. They are happy to have proof against Sherlyn. In his happiness Karan tells Preeta to cancel here engagement to Prithvi. He says he has a better guy for her. Will Karan finally express his feelings for Preeta? Stay tuned to find out.

Kundali Bhagya 15 May 2019 Preview: Is Karan About To Ask Preeta To Marry Him?