When Sarla is left alone for a while she finds a phone and calls up her house landline. 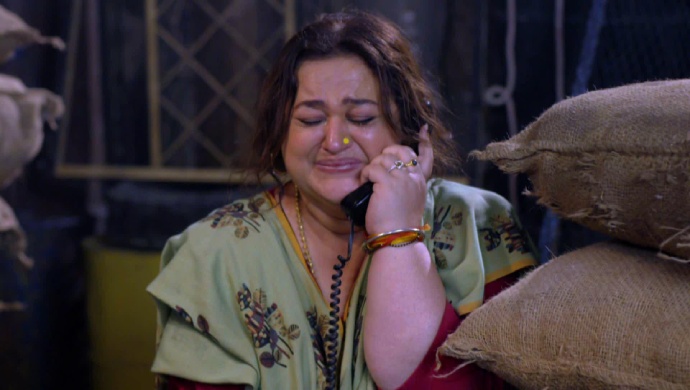 In the previous episode of Kundali Bhagya, Preeta goes to the lab to collect Sherlyn’s results. Sherlyn meanwhile gets ready for her marriage. She goes to meet Sarla who is kidnapped by her. Later when she is dressed up for the wedding, her mother comes in and sees Prithvi with her. He convinces her mother that he will get Sherlyn married. When Preeta gets the results which prove Sherlyn is pregnant she tells Karan about it and rushes to the Luthra house.

In tonight’s episode, Sarla’s kidnappers try to give her food but they don’t want to feed her anything fearing she will bite them. They open the cloth from Sarla’s face and ask her to eat the food herself. They get a parcel containing a gun which they go out to collect outside leaving Sarla alone.

Rakhi is doing an aarti when Sherlyn walks in. Rakhi asks her to take blessings from God and then take prasaad from Rakhi’s plate which she made for Sherlyn. However when Sherlyn takes Rakhi’s blessings she hits the plate by mistake and throws the prasad down. Rakhi sees this as a bad omen but Sherlyn convinces her that it was a mistake and nothing else.

Prithvi walks by and exchanges looks with Sherlyn encouraging her. Karan notices this and becomes suspicious. He sees Sammy walking by and asks him for help He wants Sammy to record a video of Prithvi’s every action during the party. Karan is trying to find proof against Prithvi to stop her marriage to Preeta as well.

Srishti finds Sammy with Tanvi again, but this time Sammy and Tanvi clear the air with Srishti. They tell her what happened that night. Srishti is convinced that Sammy is innocent and hugs him. Sammy is happy to have Srishti back in his life.

Sarla meanwhile manages to get rid of the ropes and escape. She goes around looking for a way to escape. She finds a landline phone and tries to make a call to her house. Daadi and Biji answer the call. However, Sarla is unable to talk to them because one of the kidnappers just then cuts the telephone wire. Will Sarla be help captive again? Stay tuned to find out.