In the latest episode of Kundali Bhagya, Srishti saves Preeta from getting hit by the truck. However, unknowingly, Preeta pushes Mahira who get hurt. 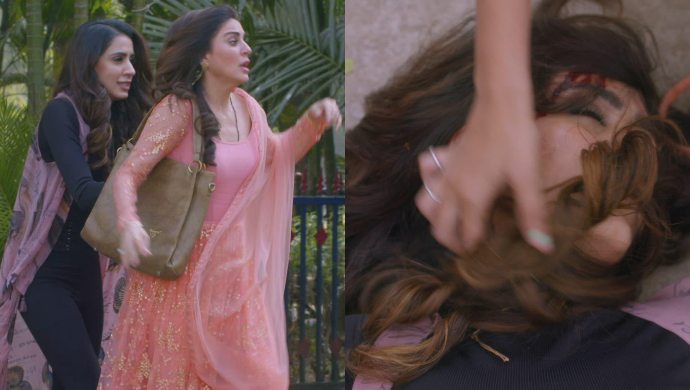 In the previous episode of Kundali Bhagya, Preeta informs Sarla that everybody at Luthra House was very polite to her. However, she will have to visit them again as Bani Dadi might need a couple of physiotheraphy sessions more. A jealous Mahira decides to plan Preeta’s murder with Sherlyn. Sherlyn hires a truck driver to run over Preeta when she leaves from Luthra House for her home. Preeta tells Srishti that Karan gifted her five dupattas for all the ones he tore earlier. The next day, Preeta leaves for Luthra House for a session with Bani Dadi but Sarla is worried about her daughter.

Tonight on Kundali Bhagya, Preeta is lost in her thoughts while walking on the road. She smiles to herself thinking about the happy moments shared with Karan. Sherlyn and Mahira are in a car, watching Preeta. Mahira gets upset looking at Preeta’s happy face. She tells Sherlyn that Preeta is joyous because she is thinking about herself and Karan. Sherlyn instructs the goo, that Preeta is dressed in a pink suit and asks him to be ready, to run her down with a truck. The truck driver is about to hit Preeta, when she steps aside on the pavement, to return a ball to a kid.

Sherlyn asks the goon to make another attempt and try to attack Preeta again. The goon says that the problem is that Preeta is on the pavement, if anyone pushes her on the main road, he can then hit her. Sherlyn asks Mahira to push Preeta. Preeta is busy buying candy floss for a kid. Sherlyn thinks of recording a video of Mahira pushing Preeta, so that she can blackmail Mahira in the future. Mahira takes her position behind Preeta. Sherlyn steps out of the car to make a video, of Mahira pushing in front of the truck and thus, killing her.

Srishti spots Preeta on the other side of the road, and waves at her. The truck driver and the goon gear up to hit Preeta. Mahira pushes Preeta, but Srishti runs across the road, to save Preeta in time. Srishti pushes Preeta back, on to the side of the road. However, as Preeta suddenly turns she bumps into Mahira. Mahira’s heel breaks and she ends up getting hit by the truck and later, hits her head on the pavement.

Kareena Bhua tries to help her mother, but Karan tells her that she is no doctor. Kareena Bhua tells Karan that physiotherapists are not doctors. Karan defends Preeta and tells Kareena Bhua that physiotherapists are indeed doctors, because they know exactly which nerve to press, to provide relief from the pain. A house help tells Rakhi, that Karan was very happy yesterday, when he returned home after dropping Preeta at her place. Rakhi is happy to hear this and thinks to herself, that this is exactly why she calls Preeta her lucky charm. She visited the Luthra house yesterday and everyone is smiling ever since.

Karan is upset after finding out that Rishab has to go for a work to Canada. Karan tells Rishabh that he will drop him off at the airport. Preeta, meanwhile, checks Mahira’s pulse and suggests they should take her to the hospital at the earliest. Srishti says they should catch the truck driver, who hit Mahira. But the driver and the goon flee from the spot. Sherlyn says they should take Mahira to the hospital in her car. Sarla gets upset and worried, thinking that Mahira will try to hurt Preeta. She tells Janki and Dadi that Mahira wants to marry Karan and thus, will do anything to get Preeta out of the way. Sarla prays to God, and hopes that Mahira and Kareena Bhua don’t cross paths with Preeta.

Preeta gets Mahira admitted in the ICU. Sherlyn starts feeling anxious, thinking that Mahira’s dearh, will confirm Preeta’s re-entry into the Luthra House. Srishti observes Sherlyn and wonders why she is staring at Preeta. Sherlyn wonders how Preeta is so lucky and has managed to escaped death. Srishti thinks what would have happened if she hadn’t pushed Preeta and saved her life. Bani Dadi asks Kareena Bhua about why Preeta hasn’t arrived at the Luthra house yet. Just then, the doorbell rings and Rakhi rushes to open the door. But it’s not Preeta, but Ramona, Mahira’s Mom, who returns from shopping.