Sherlyn finds Preeta holding an envelope and finds out that it is her pregnancy reports. 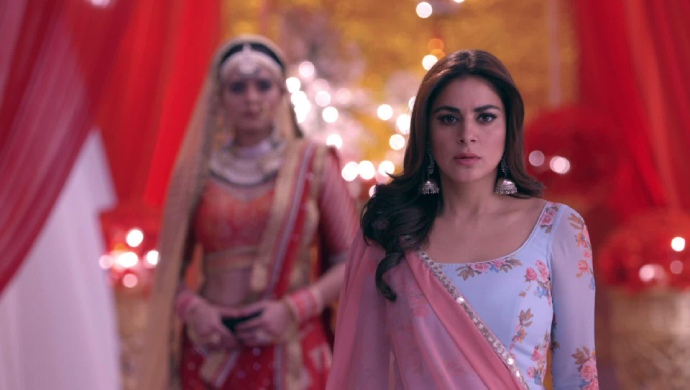 In the previous episode of Kundali Bhagya, Sherlyn takes Rakhi’s blessings before the wedding. However, she ends up knocking the plate of prasad out of Rakhi’s hand. Rakhi takes this as a bad omen but ignores it. Karan asks Sammy to keep an eye on Prithvi throughout the party. Sammy meanwhile clears the misunderstanding with Srishti and they are back together.

In tonight’s episode, Srishti bumps into Kareena aunty who immediately gets irritated with her. Sherlyn’s mother sees Kareena getting irritated at Srishti. She adds to it saying that Srishti did not wish her congratulations for Sherlyn’s wedding. Srishti promises to congratulate her after the wedding is done.

Karan pays the pandit to delay the muharat till later. Sherlyn and Rishabh’s mother’s both ask him to start the wedding ceremony but he is paid to delay the wedding. Preeta is delayed to reach because her rickshaw broke down. She decides to run and reach the house.

Karan is worried when Preeta doesn’t answer his call. He asks Sammy to come up with ways to delay the wedding. he thinks of burning down the mandap or convincing Rishabh to back out from the wedding. He decides to talk to Rishabh first.

Karan asks Rishabh why he is going through the wedding. Rishabh is also feeling upset about the whole marriage. Karan promises to give Rishabh a chance at marrying a girl he actually loves. However Rishabh refuses to tell Karan the name of the girl he loves. Rishabh’s father enters their discussion and Karan leaves to call Preeta again.

Srishti tells Sammy to record everything smartly so that Prithvi doesn;t notice what is going on. Meanwhile Preeta enters the house and begins looking for Karan. She meets Sherlyn who demands to know what is in Preeta’s envelope. Preeta refuses to tell Sherlyn but she guesses it is her pregnancy report. Stay tuned to find out how Sherlyn deals with this threat.