Preeta finds out that Sherlyn kidnapped Sarla by seeing a video, and demands to know where she is kept. 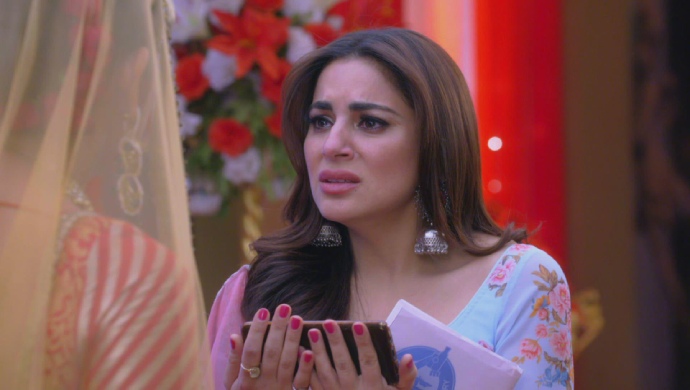 In the previous episode of Kundali Bhagya, Karan pays the pandit to delay the wedding. However, Kareena aunty and Sherlyn’s mother are insistent that the wedding start soon. Karan awaits Preeta’s reutrn so he can get the pregnancy reports and prove Sherlyn wrong. He even asks Rishabh to back out of the wedding before it is too late. When Preeta returns she is looking for Karan but finds Sherlyn. When she sees an envelope is in Preeta’s hand, Sherlyn assumes it is her pregnancy reports. Preeta is shocked that Sherlyn knows her plan.

Watch the latest episode her.

In tonight’s episode, Sherlyn tells Preeta to simply eat the food and leave the wedding. She warns Preeta that if she ruins the wedding she will ruin Preeta’s life. Preeta taunts Sherlyn for being a horrible woman who cheats people and their trust. Preeta swears to stop the wedding before Sherlyn even sits in the mandap.

Sherlyn tells Preeta to do whatever she wants to do. However, she warns Preeta that if she shows anyone the reports then she will shoot Sarla. Sherlyn shows Preeta a video of Sarla where she is kidnapped by Sherlyn’s goons. Preeta begins crying on hearing her mother’s voice.

Sarla is asking god to help her escape and meet her daughters. Sherlyn’s goons play with the gun in front of Sarla. They tell her how Sherlyn gave them a gun to kill Sarla. The also mention that they have been ordered to kill Sarla after the wedding is done.

Preeta goes to Sherlyn and demands to know where her mother is. She tries to attack Sherlyn. But Sherlyn threatens to kill Sarla if Preeta even touches her. Sherlyn tells Preeta how badly her mom was treated. Sherlyn also tells Preeta how Sarla ended up getting caught including her earlier marriage at the temple.

She asks Preeta to apologise to her is she wants to keep her mom safe. Preeta tells Sherlyn to make sure no one finds out about Sarla’s kidnapping or her pregnancy or she will kill Sarla. How will Preeta manage to deal with this situation? Stay tuned to find out.

Kundali Bhagya 20 May 2019 Preview: Sarla Manages To Escape From Her Kidnappers