Sarla learns that Sherlyn is planning to get married before the bachelors party. Will she expose her truth? 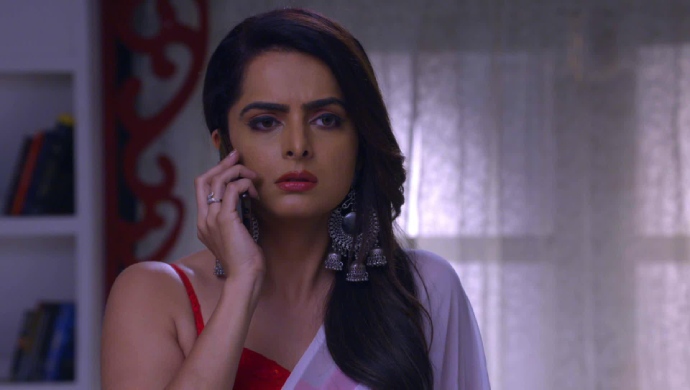 In the last episode of Kundali Bhagya, we saw Sherlyn trying to convince Prithvi, to marry her before she marries Rishabh. She threatens to leave Rishabh, if Prithvi doesn’t agree to marry her. After a lot of convincing, Prithvi finally gives in. Meanwhile, Srishti makes arrangements for Rishabh’s bachelors party, and Sameer tries to talk to her but she asks him to leave her alone. Karan gets ready for the bachelors party, and Preeta makes fun of her look. The episode ends with the two sharing a cute, romantic moment.

In tonight’s episode, we saw Sherlyn indulging in wedding shopping, as Prithvi patiently accompanies her. But he starts to get fed up and tells her that she needs to try out the next outfit that he picks for her. Sherlyn tries it on but says that she isn’t satisfied. Sarla is shopping at the same shop and looks for sarees for her friends’s sister’s wedding. She talks to Preeta on the phone when Sherlyn re-enters the room to look for more dresses. She spots one near Sarla and grabs it. She walks away and Sarla turns, without seeing that it is Sherlyn. She tells Preeta that a shameless girl snatched away the dress she was holding. Sarla decides to try out more dresses and heads to the trial room.

She is about to bump into Prithvi when his phone drops and he bends to pick it up. Just then, Sarla walks away. Sherlyn comes out of the trial room and Prithvi compliments her. She says that she liked the other lehenga better but adds that there’s a problem with her blouse. Prithvi loses his cool and asks Sherlyn to hurry up, since they have to go to Luthra house for the bachelors. She asks him to head to the Mandir while she gets the blouse fixed.

Sarita asks the shopkeeper to get a fall stitched to the saree, and waits in the shop. Prithvi walks out and asks an attendant to help Sherlyn. The latter steps out of the trial room to pick out her lehenga and Sarla finally notices her. She thinks Sherlyn is shopping for her wedding with Rishabh and is happy seeing her excitement. She thinks about Preeta’s wedding with Prithvi and decides to call him. He takes her call and she asks him to get his mother to the bachelors so that they can decide a date for the wedding.

While this is going on, Srishti enters the kitchen to get herself a glass of water and is furious seeing Sameer there. He tries to express his feelings towards her but isn’t able to. Srishti storms off fuming. Back at the shop, Sherlyn gets ready in her wedding attire and talks loudly on her phone with Prithvi, discussing the wedding plan. Sarla overhears the conversation and gets suspicious since Sherlyn keeps repeating that none of their parents will be there at the wedding.

Sherlyn speaks out loud and says that no one will come to know that she is getting married before her bachelors. Sarla overhears this and is shocked. Meanwhile, Rishabh is dressed like Karan and Preeta mistakes him to be the latter. She starts talking to him when Karan enters and joins the conversation. After a friendly chat, Preeta leaves and the episode ends with Karan asking Rishabh, that what will they do if they fall in love with the same girl?

Will Sarla follow Sherlyn to the wedding venue? Will she be able to expose her truth? Stay tuned for all the updates!

AJ Lives Up To His Promise And Ties A Mangalsutra To Guddan! Watch Guddan Tumse Na Ho Payega On ZEE5